Dr. Mohammed Sanusi, NFF General Secretary, Tuesday challenged Flamingos, the U-17 National Women Team, to go all out against their counterparts from South Africa in Saturday’s 2016 FIFA U-17 Women’s World Cup final round, first leg qualifier at the national stadium, Abuja. 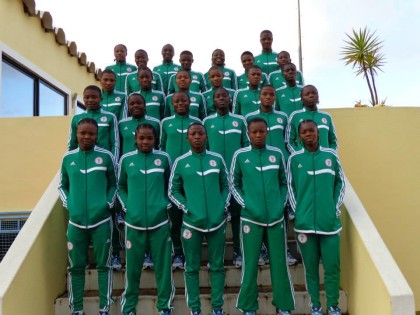 The NFF scribe gave the charge while attending the team’s evening training session in Abuja.

“I urge you to go all out against the South Africans on Saturday. The South Africans will be much stronger than the Namibians that you beat home and away in January. You are carrying the weight of this entire nation. Take your chances as they come, and don’t stop scoring.

While commending the girls for their outstanding performance in the 9-0 thrashing of Namibia in the last round of the qualification series, Sanusi told the girls to brace up for a stiffer test as South Africa’s Bantwana will pose a bigger challenge than the Namibians did.

“On behalf of the NFF President Pinnick and the entire Executive Board, I want to assure you that the NFF will motivate you in a big way to go to Jordan and surpass the performances of your predecessors.”

Nigeria has participated at all previous FIFA U-17 Women’s World Cup final competitions, from New Zealand 2008 to Trinidad and Tobago 2010, Azerbaijan 2012 and Costa Rica 2014. The team reached the quarter finals in the last three editions.

“We are solidly behind you. Every opportunity I have, I always tell football players to imbibe discipline and strong mentality, and to avoid social vices that could affect their careers negatively. I want you to know that you are ambassadors of our dear country, and must reflect that in everything you do on or off the field of play.”

Captain Rasheedat Ajibade thanked the General Secretary for his words of advice and encouragement, and promised that the team will not let the nation down come Saturday. “We will give it our very best. But we also want Nigerians to troop to the Stadium and cheer us to victory on Saturday.”