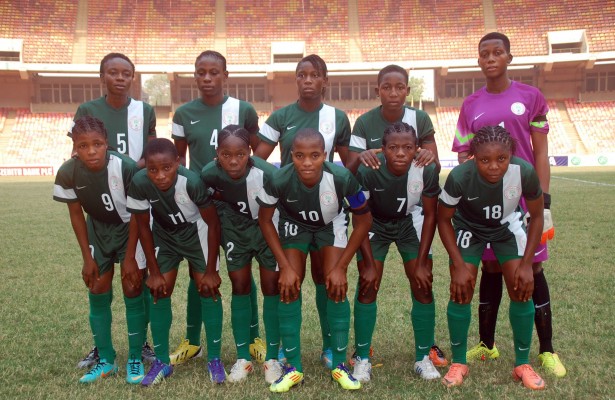 Nigeria’s national under-17 women football team, the Flamingos, on Saturday in Abuja overran their South African counterparts 6-0 in the qualifiers for the 2016 FIFA U-17 Women’s World Cup.

The final round first leg match was played at the National Stadium, with the Flamingos dominating from the onset.

Team captain Rasheedat Ajibade scored four goals while a brace from Yetunde Fajobi, all in the first half, ensured the Flamingos take a commanding lead to the second leg game.

The Bantwana came into the game, looking like a team with the aspiration of at least keeping a clean sheet, but they were unable to curtail the Nigerian girls’ firepower.

Fajobi began the rout as early as in the second minute before Ajibade doubled the lead some minutes later.

Ajibade went on to score her second and third goals in the 28th and 32nd minutes respectively.

Fajobi scored her second and the game’s fourth in the 36th minute.

Ajibade completed her hat-trick two minutes later before adding another with a lovely strike in the 41st minute to potentially end the dreams of the South Africans.

The second half of the game saw no goal being scored as the South Africans strived thereafter to ensure minimal damage ahead of the second leg in a fortnight’s time.

The other qualifiers to be decided within the weekend will see Ghana facing Morocco, and Cameroon taking on Egypt.