Senate President, Dr. Abubakar Bukola Saraki has reiterated the commitment of the current Senate to supporting the Buhari administration’s fight against corruption, saying “under my watch the Senate will never cover corruption except if the information didn’t come to us”. 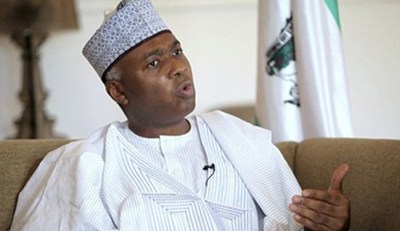 Bukola Saraki,
President of the Senate of Nigeria

Speaking with a team of editors of the London based “The Economist” newspaper at the weekend, Saraki, according to the statement by his Special Assistant on Public Affairs, Mohammed Isa, said the Senate is ever ready to partner with President Muhammadu Buhari to ensure the success of the anti-corruption war.‎

The Senate, he said had already demonstrated such commitment through its interventions on many alleged corrupt transactions such as its swift investigation and adoption of a report on the management of the Treasury Single Account (TSA) that saved the nation about N7billion and the exposure of the inconsistencies in the 2016 budget.

The step, he said was a departure from the past where such reports were either watered-down or not presented for debate and adoption. He cited the report he presented to the last Senate on the over N1trillion fuel subsidy scam that never saw the light of the day.

In furtherance to the commitment, the Senate President said Nigerians would in the next few weeks be availed with the details of the National Assembly budget which will be a departure from the tradition of having one line item budget.

“For the first time we promised Nigerians to give out our budget breakdown. The committee will make its report available by next week. We are resolved to break the tradition of one line item,” he emphasized.

Saraki said though party differences exist between the senators, citing example of the leadership tussle, he, however said, national interest and the desire of each senator to fulfill the promises made to Nigerians have become the guiding principle of the senate in their team work.

On the economy, he said the Senate has embarked on series of legislative interventions to create conducive environment for the private sector, as he said, “it is only when the private sector thrives that the issue of unemployment will be addressed and the nation’s GDP will increase.”

“Few days ago, we received a report on the laws that need to be amended in order of priority importance to ease doing business and overall private sector participation in the stimulation of Nigeria’s economy. We will soon commence the implementation of the recommendations in the report in addition to pushing for the amendment of the Procurement Act to stimulate and protect our local industries,” he assured.

He blamed lack of firmness and consistency in policy implementation by the past administrations as the main obstacle for the growth of the private sector.

“If people have confidence that these policies have come to stay, nothing will stop them from coming to invest in the country,” he stressed.

He allayed the fears that the low prices of oil will have negative impact on the implementation of the 2016 budget, saying that, “what we need to do is to block leakages and show more transparency.”

“If we can block leakages, stop the wastage and institute a culture of transparency in governance, the revenue in-flow will not be substantially affected. Without these, even if oil is sold at more than a $100 per barrel, we will continue to witness a decline in revenue in-flow as we witnessed in the past,” Saraki said.