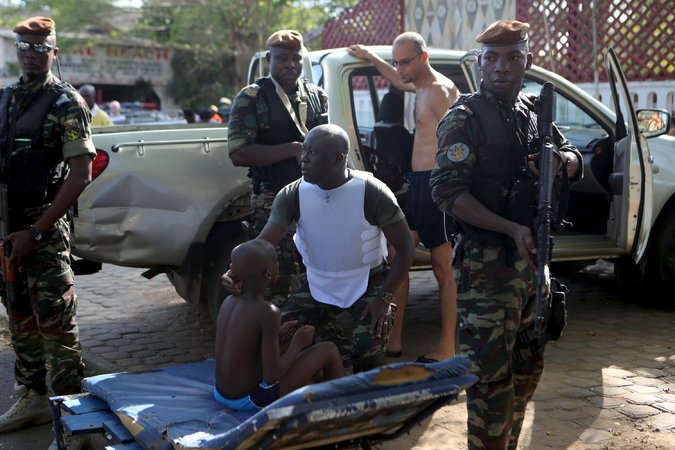 Gunmen from al Qaeda’s North African branch killed 16 people, including four Europeans, at a beach resort town in Ivory Coast on Sunday, the latest in a string of deadly attacks that have confirmed the Islamists’ growing reach in West Africa.

Six shooters targeted hotels on a beach at Grand Bassam, a weekend retreat popular with westerners about 40 km (25 miles) east of the commercial capital Abidjan, before being killed in clashes with Ivorian security forces, the government said.

“Six attackers came onto the beach in Bassam this afternoon,” Ivorian President Alassane Ouattara said during a visit to the site. “We have 14 civilians and two special forces soldiers who were unfortunately killed.”

A French man was killed in the attack, according to a French foreign ministry spokesman. The nationalities of the other dead were not yet known, but four were European, one officer said during a briefing attended by a Reuters reporter.

The reporter saw the bodies of three white people at Grand Bassam’s Chelsea Hotel and another in the Hotel Etoile du Sud next door.

A short drive from Abidjan – one of West Africa’s largest cities with around 5 million inhabitants – Grand Bassam fills up on weekends with thousands of beachgoers.

Witnesses said the gunmen followed a pathway onto the beach where they then opened fire on swimmers and sunbathers before turning their attention to the packed seafront hotels where people were eating and drinking at lunchtime.

“They started shooting and everyone just started running. There were women and children running and hiding,” said another witness, Marie Bassole. “It started on the beach. Whoever they saw, they shot at.”

Security forces moved to evacuate the area surrounding the beach. Bullet holes riddled vehicles nearby and glass from shattered windows littered the ground.

The body of one of the attackers, dressed in dark trousers and a blood-covered striped shirt, lay beside the beachside entrance to one hotel, a bullet hole in his head.

Beside him on the sand sat a combat vest used to carry extra ammunition. Nearby, on the ground, lay unexploded grenades.