With the support of the National Assembly, Nigeria intends to sign the United Nations Agreement on Zero Routing Gas Flaring by 2030, according to Vice President, Prof. Yemi Osinbajo, SAN. 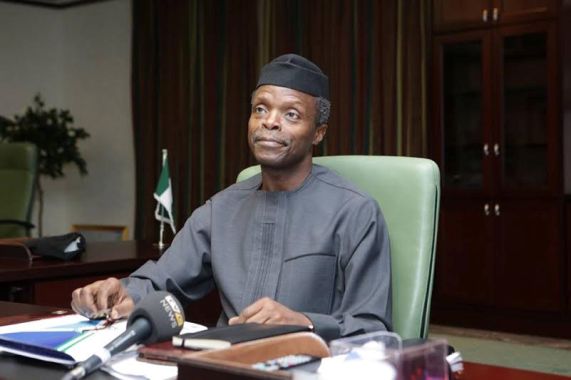 Vice President of The Republic of Nigeria, Prof. Yemi Osinbajo

Moreover, Prof. Osinbajo disclosed that the federal government has indeed set an earlier national target of 2020 to end gas flaring in the country.
Speaking today at the opening of the 6th African Petroleum Congress and Exhibition where he represented President Muhammadu Buhari, the Vice President , who declared the conference opened, said ending gas flaring was an imperative for African oil producers considering the amount of waste involved. But he also called on African countries to take advantage of the gas-to-power potentials.

He observed that “there is also the gas-to-power challenge in many member-states and the paradox of much gas but precious little gas to fire power plants.”

Continuing, he stated that “it’s time to take a much further stand on gas flaring, both from environmental and a waste-of-needed-resources perspectives,” the Vice President stated to the gathering composed of oil and energy ministers from several African countries and chieftains in the oil and gas sector.

The Vice President explained that the incremental use of gas in Africa’s energy mix has become an imperative stressing that “if Africa must meet her future energy needs, the issue of the development of a robust gas infrastructure must be jointly addressed.”

Addressing legislators, policy makers and oil and gas industry experts from around the continent at the International Conference Centre in Abuja, Prof. Osinbajo observed that with the present volatility in the industry, the coming years would be defining for African oil and gas producing countries.

He suggested that developing local content initiatives and policies would be very useful for the sector, while also adding that “a common approach to local content will ensure that the whole of Africa benefit from economy of scale associated with vast resources.”

Besides, he said with the current oil prices and the challenges faced in the industry, the relevance and creativity of the African Petroleum Producers Association “is being tested.”

Vice President Osinbajo assured that the continent has all the resources needed to transform African countries stating that “there is no reason why the African oil and gas industry should remain attached to the apron springs of industries elsewhere.”

Expressing the need for African oil producing countries to take their destiny in their hands, Prof. Osinbajo challenged African Petroleum Producers Association (APPA) member-countries to recognize the latent and huge resources in Africa and develop the strategy for the development of domestic refining capacity in the oil and gas critical for sustainable economic growth.

“We must explore mechanisms to expand regional refining capacities in an efficient and cost effective manner”, he submitted, recalling Nigeria’s active involvement in the West African pipeline project expected to deliver clean, safe natural gas from Nigeria to countries in the sub-region.

While commending the organizers of the conference, the Vice President described the theme of the meeting- “Positioning African Petroleum For Global Development and Value Addition” as apt because hydro carbon accounts for a significant proportion of government revenue and could help address the challenge of gas-to-power for energy generation.

In his welcome remarks, the Honourable Minister of State for Petroleum Resources, and President of APPA, Dr. Ibe Kachikwu stated that the conference was timely coming at a critical period when the industry was experiencing price volatility. He observed that the situation is of global concern threatening oil and gas investments, but also creating opportunities for new energy sources.

At the opening ceremony of conference were members of the National Assembly, Honorable Ministers and members of the Federal Executive Council, FEC, from Nigeria including the Communication Minister, Mr. Adebayo Shittu, the Minister of State for Health, Dr. Osagie Ehanire, and the Secretary to the Government of the Federation, Mr. Babachir Lawal. The Executive Secretary of the association, Engr. Mohaman Gaya, envoys as well as local and international Petroleum Industry chieftains and experts were also in attendance.