The Chairperson of the African Union Commission, Dr Nkosazana Dlamini Zuma has lauded the relationship between Africa and Italy. 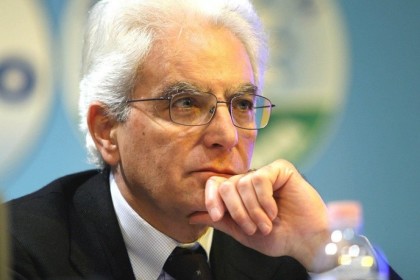 The Italian President, accompanied also by the Minister of Education, University and Research, Stefania Giannini, and by the Vice Minister of Foreign Affairs and International Cooperation, Mario Giro, held a bilateral meeting with the African Union Commission Chairperson, H.E Dr. Nkosazana Dlamini Zuma and Commissioners.

“We are very pleased to have welcomed the President of the Italian Republic H.E. Sergio Mattarella on his first visit to the African Union,” the AUC Chairperson said after meeting the visiting President, adding that, “the visit is another concrete step to broaden and deepen the relationship between the AU and Italy.”

During the press briefing, Dr. Dlamini Zuma said that, Africa and Italy have had a long standing history of cooperation ties, and that Italy can play an important role in contributing to the transformation of Africa’s economy in different areas such as job creation, agriculture and agro processing, skills development, renewable energy, women empowerment and fight against child marriages, infrastructure, peace and security and migration among others. These areas are within Africa’s Agenda 2063, which she added encompasses everything in the Sustainable Development Goals (SDGs) of the United Nations.

She also congratulated the President and the people of Italy for the successful organisation of Expo 2015 held last year in Milan. “We as Africans felt proud with the outcome of the Expo”, noted Dr. Dlamini Zuma.

On his part, the Italian President said: “I am particularly pleased to pay my first State visit in Africa to this city, the diplomatic capital of the continent, hosting an important Institution whose valuable contribution to promote a more prosperous, integrated and peaceful continent Italy fully supports, also in the European Union framework”. President Mattarella reiterated his country’s commitment to work closely with the AU to help advance the development agenda of the continent inscribed in the Africa Agenda 2063, which he said is in line with the vision and aspiration of the UN Agenda 2030.

The meeting provided an excellent opportunity to put renewed focus on the bilateral cooperation in the fields of peace and security and migration, confirming the opportunity for a stronger and longer term partnership in order to jointly address the root causes of migration and build migration management capacities in the African continent.

While recognizing the importance of standing with the Government of National Accord as Libya’s sole legitimate Government, the two sides expressed their full support for a stronger role of the African Union, who recently appointed former President Jakaya Kikwete as Special Envoy on Libya.
In the framework of the Africa-EU relations, the two delegations agreed on the important role of Italy as a member of the EU to contribute to strengthening Africa-EU relations.