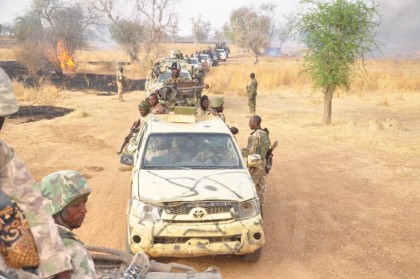 The Chief of Army Staff, Lieutenant General Tukur yusufu Buratai, has assured Nigerians that the insurgency that has threatened security and peace in some parts of the country will soon be a thing of the past. He gave the assurance yesterday 15th Mar 16 when he visited Governor Abiola Ajimobi of Oyo State in Ibadan, the state capital.

Gen Buratai was received by the Deputy Governor, Moses Alake Adeyemo on behalf of Ajimobi.

The Chief of Army Staff, who was accompanied by some of the Army top brass on the visit including the General Officer Commanding, 2 Division Nigerian Army, Major General Laz Ilo, said the military had recorded remarkable achievements in the fight against terrorism, especially in the Northeast.

He said: “We will soon overcome the insurgency that once threatened peace and security in some parts of the country. I’m using this opportunity to again solicit the support of the public in the provision of information on any suspicious acts or criminal activities.

“The army will adopt a long term surveillance and intelligence gathering to stop Boko Haram attacks”.

General Buratai lauded the Ajimobi-led administration for what he called “its support for the officers and men of the Division”, a development, he said, had contributed immensely to the sustained peace in the state.

“Oyo State has been very supportive in the area of providing security. I can confidently say that the security situation in Oyo State is quite encouraging”.

Earlier, the deputy governor applauded what he called “the supportive role being played by the army” in the area of security of lives and property in the state, which, he said, had largely contributed to the prevailing peace in the state.

Mr. Adeyemo commended the army for the sacrifices being made to curb the incessant attacks by Boko Haram insurgents, charging officers and men not to relent, until the outlaws are completely wiped out.

He also pledged the continued support of the Ajimobi administration for all security agencies in the state, stressing that it would continue to accord priority attention to the maintenance of peace in the state.