Nigeria and the Doha-based international broadcaster Al Jazeera are to collaborate in the area of capacity building for journalists in the government-owned media organizations, especially the Nigerian Television Authority (NTA). 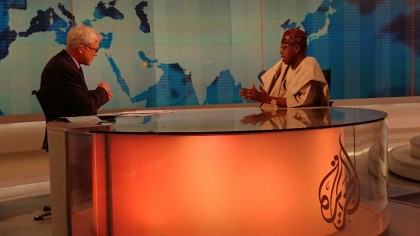 Minister of Information On Aljazeera

He said the collaboration could be in the areas of capacity building as well as exchange of programmes and personnel.

”Our plan is to reposition the public media organizations to make them effective and competitive, irrespective of which government is in power,” Alhaji Mohammed said during a meeting with the Acting Director General of Al Jazeera, Dr. Mostafa Souag, in Doha, Qatar, on Saturday.

The Minister also called for a ‘special relationship’ between Al Jazeera and the Nigerian Government in the coverage of the key policy areas of this Administration – the fight against corruption and terrorism as well as the efforts to revamp the economy.

He assured Al Jazeera that the present Administration in Nigeria ”is an extremely open government” and that the organization would not have any problem doing its work in the country.

Responding, the Acting Director General of Al Jazeera hailed Nigeria for providing a conducive environment for the media to carry out its duties.

”Despite a lot of conflict and tension, you have managed to create a conducive environment for the media. This is very important for us in the media and we hope to see more freedom and more protection for the media,” he said.

Dr. Souag said Al Jazeera is willing to cooperate with the ministry in the area of training, adding: ”Our training centre is one of the most professional in every aspect of the media, We are more than happy to work with you.”

The Minister is in Qatar to attend the 2016 Annual Congress of the International Press institute (IPI), which is due to open later on Saturday.