#NGAEGY: Critical Points At Stake For The Eagles As They Take On Pharaohs of Egypt in Kaduna

Nigeria host Egypt on Friday at the Ahmadu Bello Stadium (ABS) in Kaduna before traveling to Cairo for the return leg four days later. 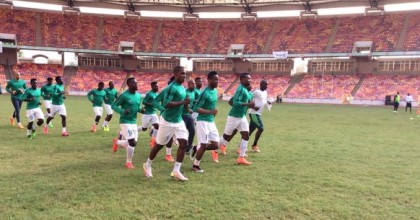 Only the group winners are guaranteed automatic qualification to AFCON 2017. The two best-placed runners’ up also qualify, there is huge pressure on the Nigerian Team to get a result. As the Super Eagles are trailing their rivals by two points and need to win at least one of the battle royal with Egypt to stay in contention to top their group.

The acting team coach Siasia has plenty players who he can rely on to do the job for him. on-form EPL and highest goal scorer for Watford star Odeon Ighalo and Arsenal’s Alex Iwobi who was first to hit the Super Eagles camp in Abuja, also joining the likes of Chelsea midfielder Mikel and Victor Moses of West Ham United striker.

Iwobi who came to lime light after super performance against FC Barcelona in the Champions League and excellent run on Saturday against Everton FC arrived Sunday afternoon. He’s the first to arrive among the 20 foreign-based players invited by interim Super Eagles coach, Samson Siasia, for the crucial double-header against the Pharaohs of Egypt.

The foreign based players will join other home based stars who have been training in Abuja. The Lucky Home based players include are Ikechukwu Ezenwa, Kalu Orji, Chibuzor Okonkwo, Etim Matthew, Ifeanyi Matthew and Etebo Oghenekaro.

The camp in Abuja is gradually peaking as 11 of the 40 players expected to jostle for slots in the final squad for the crucial 2017 AFCON qualifying matches against Egypt have arrived at the Bolton White Apartment camp site.

Tickets for the qualifying match at the ABS, Kaduna on Friday, will go for N1000 and N300 for covered stands and popular stand respectively.

The team is expected to fly to Kaduna Today the match venue to intensify training.