Nigerian Army: Heroics of our Troops in Gamboru Ngala 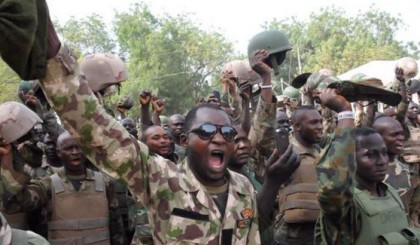 Nigerian troops,  liberated Gamboru Ngala, the strategic neighbouring town to Cameroon and Niger after a fierce battle on September 1, 2015. Many of the bravery of the troops in that region or the joy at the restoration of order by the people left in the town have largely gone unheralded. The Nigerian Army through its media arm released clips of the excitement among the returning residents as well as the troops following the raising of the Nigerian flag in that town today following field inspection by Chief of Army Staff(COAS) Lt Gen Tukur Buratai. 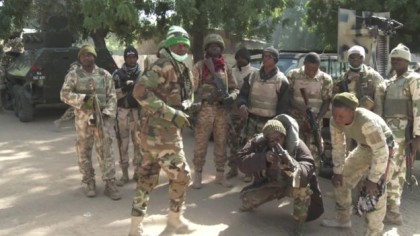 The Chief of Army Staff (COAS), Lt Gen Tukur Buratai led Nigerian troops on inspection of the recaptured strategic town of Gamboru Ngala in Borno State, crossing a bridge to Fatokol where a huge crowd of Nigerians received them with cheers and emotional tears.

The COAS assured the crowd that with the support of President Muhammadu Buhari, supply of new equipment and deployment of well-trained troops, Boko Haram atrocities would soon come to an end.

In addition, General Buratai clarified the task of Operation Lafiya Dole in three terms – to defeat the insurgents, to facilitate humanitarian activities and observe human rights and restore the administrative functions in the liberated area.