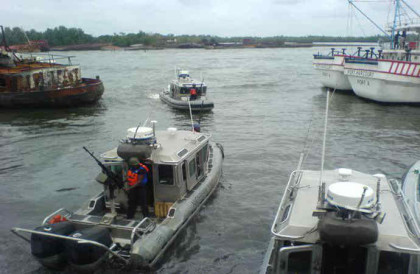 President Muhammadu Buhari has approved the establishment of a naval command post in the Lake Chad region in a bid to strengthen the fight against insurgency in the North-East.

The Director of Naval Information, Commodore Chris Ezekobe, disclosed this during a courtesy visit to the News Agency of Nigeria (NAN) in Lagos.

“There is a presidential directive to set up a command post in the Lake Chad Region and that is ongoing,” said the naval spokesman.

According to him, naval personnel for the command post are currently undergoing training in the North East and will be deployed once it becomes operational.

Ezekobe said that the navy had three categories of forces working in the North-East.

Similarly, the naval spokesman said that the navy had acquired 30 repellent boats and was expecting 50 more by the end of May to enhance security in the Niger Delta Region.

According to him, this will make it difficult for the criminals to operate in that domain.

“We have improved on our surveillance capability and the regional maritime awareness capability.

“We have increased the number of satellite stations along the coasts.

“Essentially, our territorial waters are well covered by the surveillance system.

“We have acquired one Offshore Patrol Vessel from China and the other will arrive before the end of May,” he said.

The naval spokesman said that between 70 and 80 per cent of the nation’s wealth comes from the maritime environment, hence the need to secure the terrain.

“We need to partner with other maritime security agencies, the media and other stakeholders.

“It is a collective effort and we must secure that environment to make our nation prosperous and great again,” Ezekobe said. (NAN)