The Federal Road Safety Commission (FRSC) has deployed 11,000 personnel, 795 vehicles, 283 bikes and 76 ambulances across the nation for the Easter celebration.

This is contained in a statement 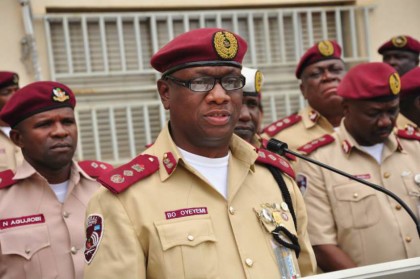 signed on Wednesday by Mr Bisi Kazeem, the Head, Media Relations and Strategy of the FRSC in Abuja.

According to the statement, the approval of the deployment is based on the observations of the commission and that of Mr Boboye Oyeyemi, the Corps Marshal and Chief Executive of the organisation.

The statement said the deployment would address the misuse of the roads by road users which had, in the past, resulted in high level of road traffic crashes, particularly during festive seasons.

“Nigerians will be once again on the road to visit their homes and loved ones in the spirit of Easter celebration marking the death and resurrection of Christ.

“It is in a bid to arrive at their destinations early that most transporters and private vehicle owners drive recklessly and overtake wrongfully, thereby, undermining their safe arrival.

“In a bid to make more money, most transporters resort to overloading and the resultant effect is crashes which in turn lead to loss of lives and property,’’ it said.

The statement also said that the commission would check all cases of wrongful overtaking, overloading, reckless driving and dangerous driving.

Other violations to be checked include; number plate violation, speed limit violation and lane indiscipline.

“The Corps Marshal’s vision is to increase
Traffic Management of the Corps to ensure smooth travels before, during, and after the festive season to minimise the occurrence of road crashes,” it said.

To achieve this, the statement said that public enlightenment, removal of rickety and broken down vehicles and a full-scale enforcement against fake and expired drivers licence, would be employed.

“With the measures on ground and with the cooperation of motorists and all staff of the Corps deployed for the operations, road crashes would be reduced minimally, if not eradicated,” the statement added. (NAN)