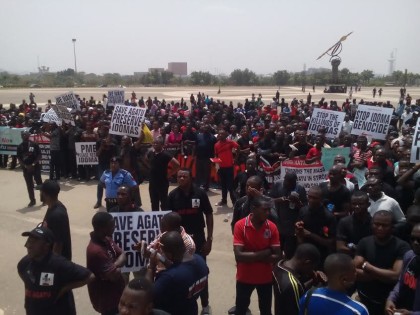 In a swift reaction to the recent killing in nine Agatu Local Government Areas of Benue State, allegedly perpetrated by herdsmen, the Inspector-General of Police, IGP Solomon E. Arase, fdc, NPM, visited the area where he assessed the extent of damage caused during the clash and the impact on the Agatu people of the State.

Based on his assessment and coupled with the logistical requirement the IGP Immediately deployed 2 Units of Police Mobile Force to the area, to reinforce the Unit on ground, while additional Police operational vehicles were also sent to the Commissioner of Police in the State Command to aid operational support.

The Inspector-General of Police reaffirmed that the Nigeria Police Force, working in conjunction with the State Government, will do everything within its powers to fish out and bring to book all those involved in this and other similar killings, stressing that an end must be put to this endless circle of impunity.

IGP Arase, while describing as regrettable, unprovoked and brutal the killing of two Policemen who were on legitimate assignment in the troubled area of Benue State, by the people of the area, warned that any person found to be involved in the killing would be made to bear the full wrath of the law.

The IGP further noted that the Police and other security agents have relentlessly worked round the clock with significant success to stave off such attacks on the people of the area and the entire country at large and therefore reassured Nigerians that security agencies will do everything possible to further strengthen the security within and beyond the State.

While commiserating with families of the affected victims, the Inspector-General of Police appealed for the citizens’ support and cooperation to enable the Nigeria Police and other security agencies unmask the perpetrators and sponsors of the crime.