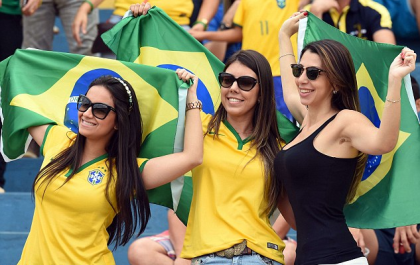 Is not just an ordinary international friendly at that level. Brazil is still nursing the defeat handed to them at the Atlanta Olympic Football games, where Nigeria U23 Team beat Brazil U23 team then in 1996 with scoreline finishing 4-3 in favor of the Nigeria’s Dream Team I which they eventually won Gold medal in the competition.

The much talked about encounter described as a repeat of the Atlanta 1996 Olympics football event began on a positive note for the African U23 champions after taking the lead as early as the third minute after Akwa United’s Ekpai tucked home a rebound.

Brazil gradually settled into the game and came close to scoring when Gabriel’s shot was saved by Emmanuel Daniel who was excellent in the first half.

The Rogerio Micale-led side fought back, with Gabigol, Alisson and Felipe Anderson coming close on several occasions but were denied by a combination of nervy finishing and the superb form of Emmanuel Daniel in goal for Nigeria.

Brazil were the much better side but Nigeria defended stoutly and would have gone ahead if not for the profligacy of the attackers.

In the early Friday morning encounter that saw Ubong Ekpai’s third minute strike was all the Nigerian Dream Team VI needed to subdue Brazilian U23 team in the keenly contested display in Cariacica, Espírito Santo, Brazil.

Speaking after the match, Coach Amoo admitted that the boys struggled to contain the hosts in the first half as they launched their attack from the left wing, but the team was able to redress that in the second half.

Fatai Amoo said “the display of his boys against host Brazil has justified their emergence as the African champions, and shown that they really can win gold at the Olympics in Rio come August this year.”