‘How Buhari’s Financial Discipline Save States’ Amidst Fall In Oil Price: – Shettima

With the fall in price of crude oil to below forty dollars per barrel which has threatened Nigeria’s main source of revenue, Government in the 36 States would have been in serious trouble 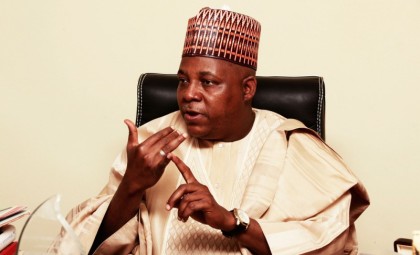 if not for the financial prudence of President Muhammadu Buhari, Borno State Governor, Kashim Shettima explained before his colleagues in Kano.

Spokesman, Isa Gusau said in a statement issued from Kano that Shettima spoke at a wedding reception attended by Governors of Kano, Kebbi, Niger, Imo, Katsina and Gombe States at the Government House in Kano, soon after the Governor of Jigawa State, Alhaji Muhammad Badaru Abubakar gave out his daughter, Amina in marriage to Lawan Dahiru Mangal at a fatiha held at Umar bn Khattab Mosque in Kano.

“When the price of crude oil was over one hundred dollars per barrel, Borno State was receiving around N4.5 billion per month. Today, oil price has grossly fallen down to less than forty dollars per barrel which represents about 80 percent fall in price. Oil is our main source of revenue as a country, so ordinarily, State like Borno should have received 20 percent of what we were receiving when oil was over 100 dollars. This month, we received N2.6 billion at time oil is below 40 dollars and this is more than 50 percent of what we were receiving at a time oil was over 100 dollars.

Our salary wage is N2.6 billion but we still have to be grateful to President Buhari because wallahi if not for his financial discipline, all of us here would be in soup by now. I am not here to play politics, I respect the fact that we are a mixture of people with different political affiliations. Our brother, the Governor of Gombe State is in PDP so I am not playing politics but we have a responsibility to explain situations to the public so that they understand the economic times we are in at the moment and Buhari has made things tolerable in the face of the bad situation” the Governor said amidst ovation at the gathering.