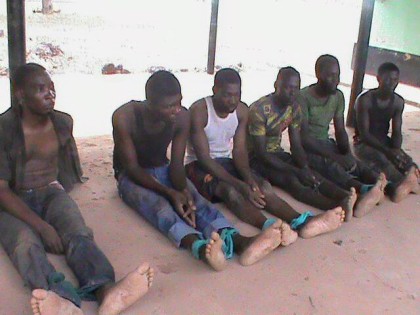 On behalf of Officers and men of 93 Battalion, I am delighted to welcome you to our Headquarters in Takum. Let me start by thanking you most sincerely for your continuous commitment and support in publicizing the activities of the Nigerian Army in aid to civil authority as ensured in the 1999 Constitution of the Federal Republic of Nigeria (As amended) and to reassure you of the Chief of Army Staff commitment to protect lives and properties whenever we are called upon to do so in line with the provisions of the law.

The essence of this briefing is to create awareness in the public on what happened on the 25th March 2016 at Ibi Local Government Area (LGA). Ibi LGA of Taraba state has been characterized by ethno-religious crisis and the one of 25th March 2016 was one of such. The incidence started by some youths throwing stones at Muslims in the mosque during Juma’at prayers which later escalated to sporadic shooting, but for the timely intervention of troops and other sister security agencies, normalcy was restored and 24 hours curfew imposed. For now, there has been no report of death. 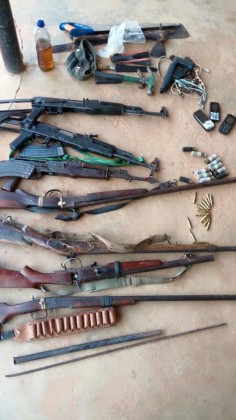 However, 6 persons have so far been arrested in connection to the crisis and manhunt is ongoing for other perpetrators. The troops have recovered 3 AK-47 assault rifles, 2 AK47 magazines, 4 single barrel guns, 11 cartridges, 1 axe, 2 hammers, 1 cutlass, 2 handsaws, 1 knife, 3 mobile phones, 1 catapult, 1 broken butt, 19 rounds of 5.56mm, 104 rounds of 7.2mm (Special) ammunitions and I litre of Premium Motor Spirit (PMS) from the suspects. In line with established procedure, we will be handing over suspects and arms to the Nigeria Police Force for further investigation and prosecution.

It is worthy to note, prior to this incidence, the Unit had 2 major peace meetings as directed by higher authorities between the stakeholders within the same week but it seemed all that was said fell on deaf ears, but dialogue will never cease.

We will continue to encourage the stakeholders to resolve the crisis politically and will not relent in making sure there is lasting peace in Ibi as stipulated in the Chief of Army Staff Vision.

Further more, measures have been put in place for more peace meetings to resolve the ongoing crisis in Ibi LGA. All stakeholders in the area are also requested to educate mostly the youths on the need for peaceful co-existence and tolerance amongst one another for the benefit of growth and sustenance.