Very few knew that Daniel “The Bull” Amokachi, has secured a one-year contract to manage JS Hercules, a Finnish side. 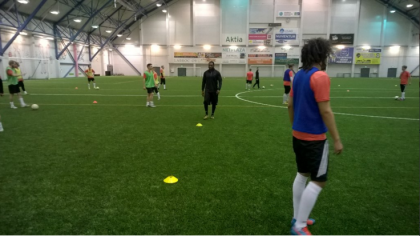 Amokachi’s side was overwhelmed by the country’s Europa Cup representative with 8 goals in a match he described as an eye opener.

Already the first minutes showed that only in second and risen Veikkausliiga team silver level difference was obvious.

“After all, it was a good game for us. We played really, against a really good team. When playing Veikkausliiga silver teams and the Finnish representative of the euro in games against the teams, the game’s strength and speed will see that we are just at different levels,” Daniel Amokachi said.

“When we play like this against good teams, we can measure it, how much we should be able to improve our performance. This was RoPSilta a very good game. They did everything right. They kept the ball when the ball had to be held and give it pressurizes when it was needed. I think this tells us that we played against the top teams. ”

Hercules did not reach the match to the best performance. Although the teams level difference was already known, the readings went up as soon as the first period of rather ugly.

Amokachi “If you play against teams like RoPSin and freezes as soon as you hear the name, it is time to face a difficult game. It tells us that we are not done yet. If we played even better against Veikkausliiga teams, it would be the moment when we should play our game the best. If we want to remain in this season, the players must raise their level. Today, unfortunately, it has not been seen.”

However, the final result of the match earned convincing victories follow-up to the Finnish Cup.