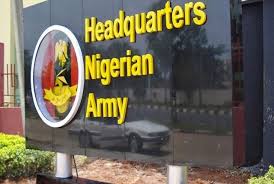 The attention of the Nigerian Army was drawn to a news story on the online page of Daily Trust newspaper titled “Angry soldiers Block, Release GOC Over Food, Water Shortage” written by Shehu Abubakar.

While acknowledging that indeed troops that captured the strategic forest of Alagarno, experienced some logistics problem that include water shortage, due to some unforeseen circumstances which is normal in war situation, it is not true that the troops behaved in the manner he stated. If Alagarno is truly inaccessible, how did the gallant troops rout out the Boko Haram terrorists in the forest? The concoction of this story and the release of yet another video by some remnants of Boko Haram terrorists could be more than mere coincidence. Therefore, one begin to wonder what is the motive behind such false story by the reporter.

For the avoidance of doubt, the Acting General Officer Commanding (GOC), 7 Division, Brigadier General VO Ezugwu indeed visited the troops and also supplied water to them. The GOC did not leave the troops as insinuated. Rather, the troops hailed the GOC for his passion and empathic disposition towards the soldiers. As a matter of fact, he actively participated in clearance operations along Bulablin – Alargano axis with the troops and was with them in their defensive location throughout.

Consequently, the Nigerian Army wishes to request the retraction of this story by the paper and also enjoin reporters to always cross check their facts before filing their stories. They should also understand that misinformation by Boko Haram terrorists and their sympathizers greatly assist their evil activities.
The public is urged to disregard the story and continue to support the Nigerian Army in the fight to end terrorism and insurgency in our beloved country.

You are kindly requested to disseminate this rejoinder to the public through your medium.
Thank you for your kind cooperation.