President Buhari Is Back From Nuclear Security Summit Trip

President Muhammadu Buhari has returned to Abuja after a five day official visit to the United States. 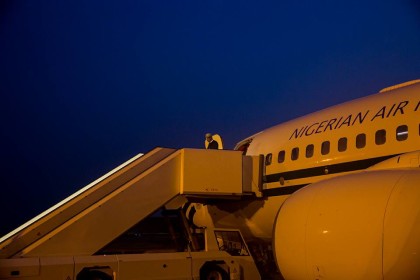 President Buhari was accompanied by the Governors of Bauchi and Kwara States arrived Nnamdi Azikiwe international Airport at about quarter past six Monday morning.

He was received at arrival by the Minister of the FCT Mohammed Bello, Inspector General of Police Solomon Arase, the Chief of Staff to the President Abba Kyari and other senior government officials.

While in the United States, President Buhari participated in the 4th Nuclear Security Summit during which he defended the rights of Nigeria and other developing countries to the use Nuclear energy for socio economic advancement.

The President also held bilateral engagements with some world leaders who promised to support his administrations genuine efforts at fighting corruption, insurgency and revamping the nation’s economy for the creation of job opportunities.

Before leaving Washington President Buhari met a select group of Nigerian professionals where he called for the understanding of the citizenry as the Federal government strives to dismantle obstacles to national development for a better Nigeria.