African Champions, Super Falcons qualify For AWCON 2016 On a 3-1 Aggregate 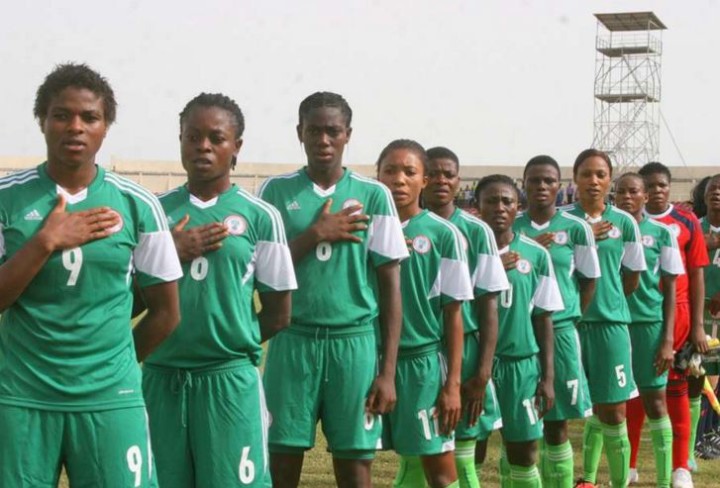 The Super Falcons of Nigeria defeated the Teranga Lionesses of Senegal 2-0 on Tuesday in Abuja to qualify for the 2016 Africa Women Cup of Nations (AWCON) scheduled for Cameroon.

The Falcons qualified for the AWCON finals on a 3-1 aggregate after having drawn 1-1 on Friday with their guests in Dakar.

In this second leg match of this final qualifying round fixture played at the Abuja National Stadium, the Falcons were dominant in spite of a lethargic performance.

They scored in each half of the game, with Rita Chikwelu scoring in the 36th minute, some minutes after Asisat Oshoala had failed to score from a penalty kick.

Osarenoma Igbinovia scored the second goal in the opening minute of the second half.

Speaking after the game, Falcons’ Francisca Ordega told NAN she was excited with the result in view of the team’s failure to qualify for the 2016 Rio Olympics.

“I am very happy since we could not qualify for the Olympics. So, our qualification for the AWCON is a thing of joy and I believe everyone is happy,’’ she said.

The Washington Spirit player however urged Nigerians to be expecting a lot from them at the AWCON in Cameroon.

“This is just the beginning, since we have more time to prepare and we have new coaches.

“`Some of the team’s main players, both the new and the old ones, are also coming. But, I think we need a little bit of time to do better,’’ she said.

Murmud-Musa Sissa, the coach of the Teranga Lionesses, also told newsmen that even though they lost the game to the Falcons but it was still a good game for them.

He however lamented his sending-off in the second half by the match referee, saying he did not understand the reason the referee gave him the marching orders.

Sissa nonetheless congratulated the Falcons, pointing out that they are a big team and he could only wish them good luck at the main competition.

He however said his team’s performance was affected by the weather.

“We experienced difficulties with the weather, because it was very hot and my players were not familiar with the terrain.

“When it is very hot, you know they lose water and they do not have time to support each other during the game. But I am proud of my group.

“We will continue to work hard so that one day we will become a big team like the Falcons,’’ Sissa said.