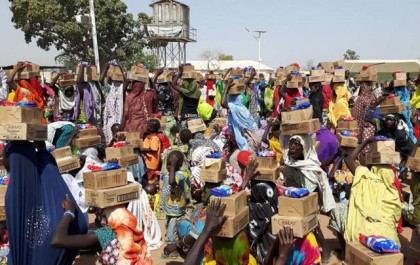 The Wife of the President, Mrs Aisha Buhari, on Wednesday in Abuja received items donated to the Internally Displaced Persons by the Abia women.

Mrs Buhari received the items at the Presidential Villa, when the Wife of Abia Governor, Mrs Nkechi Ikpeazu and a delegation of Abia Women visited the president’s wife.

The items donated are foodstuff, made in Abia Shoes, clothing, utensils, mattresses and beddings, house provisions and other consumables.

She commended the governor wife and Abia women for donating to IDPs affected by the conflict in the northeast.

She further thanked the wife governor for her acts of charity through the Vicar Hope Foundation, her pet project.

The wife of the President said a significant number of women are holding political offices in Abia and this was a clear indication that Abia women played a major role in the politics of the state.

She thanked the Wife of the first Military Head of State, Mrs Victoria Aguiyi-Ironsi who was on the entourage.

Speaking earlier, Abia Governor’s Wife described the carnage in the Northeast of the country as disheartening.

Mrs Ikpeazu commended President Muhammadu Buhari on his effort to reduce the activities of the insurgents which is gradually bringing the battle to an end.

She said the donation was in-line with the charge Mrs Buhari gave wives of governors early this year to reach out and support IDPs.

speaking futher the wife of the Abia state governor said the Abia Government was rolling out strategies that would enable the victims of terrorism and natural disasters from the North living in the state to start new livelihoods.

Through her pet project Vicar Hope Foundation, she said she had built houses for widows and the indigent as well as promoting women empowerment and participation in politics across the state.

Others are supporting increased healthcare and welfare for women and children, especially the less privileged ones.
A sickle-cell clinic and cancer diagnostic centre is presently being built in Umuahia to replicate Mrs Buhari’s pet project, “Future Assured’’ programme