See What Order And Discipline Did To China – Femi Adesina 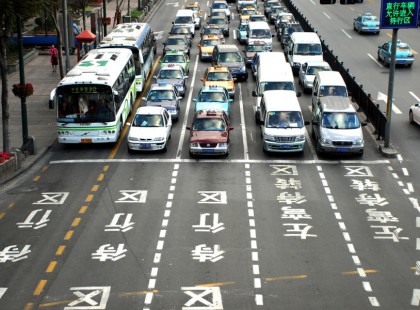 Like a troubador traversing the land, we set forth at dawn, leaving Beijing for Shanghai, China’s economic nerve center. It was 8 a.m when we headed for the airport, meaning time was 1 a.m in Nigeria. Every honest Nigerian (except those on essential duties) was supposed to be in bed, drifting from one dream to the other, also like a troubador.

By 8.50 a.m, Air Force 001 took off, piercing into the azure sky. But not before we had done a quick trip review, as the pilot and the crew got ready. It was President Muhammadu Buhari who looked out through the window of the plane, shook his head, and declared:”Did you notice the level of discipline in this city? Did you notice the cleanliness and order? Did you see anybody throwing litter, or garbage anywhere? And did you see their security agents, how smart and dutiful they were?”

Many questions from the President. Myself and Sarki Kalu Abba, senior aide, were seated with him. And we went into what could have been in Nigeria, only if there had been more order and discipline in the society. Beijing has a population of over 15 million, almost up to what Lagos has, but you don’t see endless traffic jams, disorder and bedlam, heaps of refuse, somebody urinating by the roadside, or another person doing the ‘major’ one in public glare. Discipline is the name of the game, and it has done China a world of good. When comes order to our dear native land, Nigeria? Of course, order would not come except we first imbibe discipline. That was what the Buhari/Idiagbon government attempted to do in the mid-80s, and some people unleashed the war of tongues on the regime, giving fifth columnists the excuse to strike in a palace coup. We missed the chance for national discipline, and the concomittant order that follows. And a miss, they say, is as good as a mile.

Things work like clockwork in China. And discipline is the bedrock of order. Like President Buhari told us in the National Day broadcast last year, “order is better than speed.” I pray we will eventually gain an orderly country. Amen, somebody.

After one hour and thirty-five minutes, we landed in Shanghai, the economic artery of China, and one of the largest economic capitals in the world. After settling in our accommodation, the first port of call was to the Mayor of the city, Yang Xiong. You could glean the sense of satisfaction in the man, as he reeled off statistics that make Shanghai what it is, and how a relationship with Nigeria could become mutually beneficial. Shanghai port ranks third in the world in the handling of cargo. The city has 15 metrolines, covering 588 kilometres. From a GDP of $16 billion few years back, Shanghai recorded $400 billion at the end of last year. And many more…

President Buhari told the Mayor that his administration inherited some projects, which were to be executed by China in the areas of rail, road, power, and many others, and he was in town to further the relationship between the two countries.
“Nigeria is suffering the effects of becoming a mono-product economy, and we are now looking towards agriculture, solid minerals, and manufacturing. Chinese firms are strong in these areas, and we are here for a collaboration, ” the President said.
After a banquet hosted by the Mayor and top leaders of the city, the next port of call was the Shanghai Free Trade Zone. Simply awesome, as we toured that global centre of economy and trade, which was established in September 2013.

As we listened to strides being taken at the Free Trade Zone, which helps position China as the second largest economy in the world, I kept asking myself: Will Nigeria ever get here? Can we? Will we? Will we ever hear the sound of the cockcrow at dawn? Yes, we can. But not without fighting corruption to a standstill, and defeating the monster. And not without order and discipline, which can give the much needed efficiency.
When President Buhari responded, he simply articulated my thoughts. He declared:”From all I have heard and seen here, the adage has been proven true that ‘the future belongs to the efficient.’ An efficient team has done this good job, and I congratulate you.”

The Nigerian team of governors, Ministers, and chief executives of relevant agencies, asked many questions, got answers, which we pray will set our country on the road to efficiency. Amen again, somebody.

Next stop: Commercial Aircraft Corporation of China (COMAC). Yes, China is manufacturing aircraft, and will soon bestride the aviation world like a collossus. The corporation was established in 2008, with the mission of manufacturing passenger jets. Its three goals are; deep design, market success, and commercial success. It has manufactured the ARJ21 jet, which is already widely in use in China, and will before the end of this year launch the C919, a large passenger jet that can seat between 150-170 passengers. There are already 514 orders for the plane. See what order and discipline can do for a people? Not even the sky is the limit. They go beyond the skies.

President Buhari described the feat by COMAC as “most impressive,” saying he was sure Nigeria would have something to do with the corporation in future.

Friday, April 15. Last day of the visit. The entourage sets forth at dawn again, flying to Guangzhou, another major Chinese province. There, President Buhari will meet with the Governor, and also visit the Economic and Technological Development Zone.

Femi Adesina
SA To The President
Media And Publicity