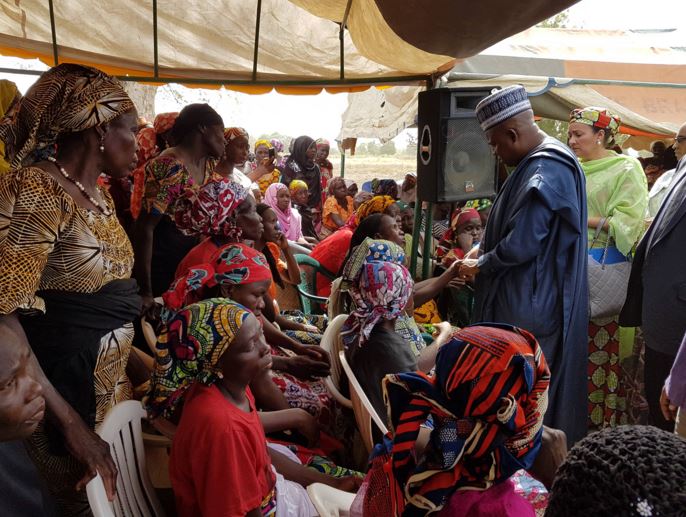 Parents of 219 Schoolgirls abducted at Government Secondary School, Chibok in Chibok local government area of Southern Borno State had fresh memories of their daughters with majority emotionally desperate to reunite with their children stolen by Boko Haram insurgents two years ago at the GSS, Chibok after a near midnight attack on the school hostel.

Parents cried at the top of their voices as they wore depressed faces when a visiting delegation of Government officials arrived a ground at the school where the attack took place on April 14, 2014, to commemorate the 2nd year since the abduction.

The visitors covered by armed security escorts traveled by road from Maiduguri for about 3 and half hours passing through horrible sights of communities attacked by Boko Haram along Maiduguri-Damboa to Chibok and returned by evening.

Yakubu K.K, leader of an association of parents of the 219 girls read an emotional poetry written by the parents to express how much they miss their daughters, hoping they return.

The parents expressed concerns on silence on the report of a Presidential Fact-finding committee set up by former President Goodluck Ebele Jonathan to establish facts surrounding the abduction of their children.

‎The parents demanded that findings made by the committee is made public so that they will know if anyone has questions to answer. The committee, made up of mostly members selected by President Jonathan had submitted it’s report in 2014 but the then Presidency didn’t make the report public.

Governor Kashim Shettima said his administration shares the pains of the Chibok parents and was working hard with the Federal Government for the release of the abducted schoolgirls.

“We now have in President Muhammadu Buhari someone with very strong commitment to finding your daughters and ours. We are jointly working very hard and we won’t stop until they are reunited with you. I have daughters, I know exactly how you feel” the Governor told the parents.

Environment Minister and leader of Federal delegation, Amina Mohammed said the President sent a delegation to travel to Chibok to show the extent of his affection for the traumatized parents. “He wants your daughters back and he wants all other captives back, he wants to end this insurgency and he is doing everything to achieve these important objectives that top his priorities since assumption of office” the Minister said.

Mashi, a Christian from Michika in Adamawa State, ruled out religious motives on the abduction.

“Insurgents have no regards for religion, they attack anyone no matter your religion. Those who founded the BringBackOurGirls coalition are mostly Muslims like Hadiza Bala Usman who came all the way from Kaduna State and she is here with us to stand by you” she noted.

Founding member of the BringBackOurGirls coalition, Hadiza Bala Usman broke down in tears when it was her time to address the parents.

“I know exactly how you feel” she said as she couldn’t hold but cry.

Mrs Maryam Uwais, also a founding member of the BBOG, called on the parents to be strong. “We have daughters, we know what it means to have a daughter abducted and this is why we will stand by you” she said.