Situation Under Control In Kareto After Boko Haram Attack – Army 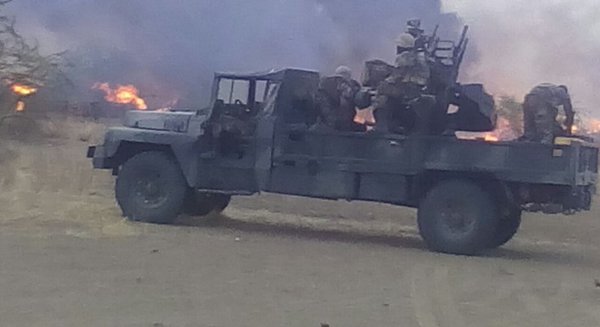 The Nigerian Army says calm has returned to the northern Borno town of Kareto after the early Monday morning attack by Boko Haram insurgents.

He said troops of the 113 battalion, with aerial support from the Nigerian Air Force, successfully repelled the attack on the town and the battalion headquarters.

Col. Usman said the troops killed quite a number of the terrorists and the situation has since been brought under control.

He said reinforcement had been sent to the unit to forestall any attacks while troops were still on the trail of the insurgents.

He added that so far, two (2) officers and twenty two (22) soldiers were wounded in action.

Usman said that all of them have been already evacuated to the Military Hospital Maiduguri  where they are receiving treatment.

The Nigerian military had recently cleared many hideouts of the insurgents in Borno, Yobe and Adamawa including their purported Spiritual Headquarters at the Alagarno forest.