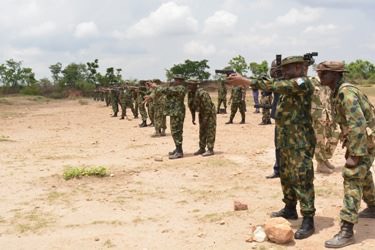 The Chief of Defence Staff (CDS) General Abayomi Gabriel Olonisakin has charged personnel of the Nigerian Armed Forces to brace up for the security challenges ahead by improving on their combat readiness and weapon handling.

The CDS made the remarks recently during the Nigerian Army annual range classification exercise at the 177 Guards Battalion Range, Keffi, Nassarawa State. He said combat readiness and proficiency in weapon handling is an integral part of the military profession and all personnel are expected to master the art of weaponry.

Speaking further, General Olonisakin noted that to combat the deadly security challenges facing the country, the Armed Forces must always renew its combat tactics and restrategise for effective military operations. He congratulated the participants for displaying exceptional firing skills, urging them to live up to expectations at all times and uphold the military enduring legacy by assisting in maintaining and keeping the peace in the country.

Range classification is an annual military exercise designed to improve personnel’s proficiency in weapon handling and to sharpen their skills.

Highlights of the exercise included the brilliant display of marksmanship by the CDS and the spectacular performance by the Principal Staff Officers from the Defence and Army Headquarters who were on the entourage of the CDS.