Kelechi Iheanacho, the rise of a Prodigy 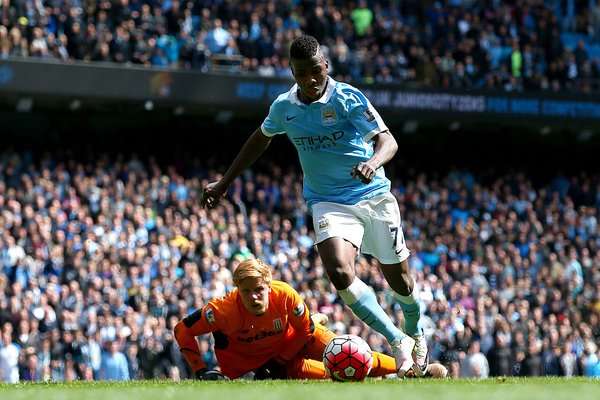 Kelechi’s dominance on the field of play is simply legendary. PHOTO CREDITS: GETTY

His first experience of a major international tournament was the 2013 African U-17 Championship in Morocco. For Iheanacho, the highlight was a hat-trick in a win against Botswana. He dedicated his goals to his mother, who died two months before the tournament.

You get really proud to see titles like – “Manchester City and Kelechi Iheanacho overwhelm Stoke City“, but down there you know a star is truly born, and heaven alone knows the limit to which it can shine. You get even more thrill when you know that a season ago, his capacity was practically unknown to the English fans.

“He’s been brilliant. He turned up in pre-season somewhat unknown, worked hard & got stuck in”

Kelechi Ihenacho, the Nigerian Prodigy as a youth represented Taye Academy in Owerri. His performances for Nigeria in the 2013 FIFA U-17 World Cup led to interest from clubs in Europe. Teams following his progress included Arsenal, Sporting Clube de Portugal and Porto.

In December 2013 Iheanacho travelled to England to discuss a move to Manchester City. He signed a pre-contract agreement with the club, stating his intent to formally sign for Manchester City on his 18th birthday in October 2014. In the interim, he returned to Nigeria. As the year drew to a close, the Confederation of African Football named him the Most Promising Talent of the Year for 2013 at the CAF Awards.

Iheanacho joined Manchester City’s Academy on 10 January 2014. Before the 2014–15 season, Manchester City visited the USA on a pre-season tour. Though still not formally a Manchester City player, Iheanacho joined up with the squad. He played and scored in the first match of the tour, a 4–1 win against Sporting Kansas City, and scored again against A.C. Milan in a 5–1 win. After the conclusion of the tour, Manchester City arranged for Iheanacho to train with Columbus Crew until mid-October. Delays in obtaining a work permit meant Iheanacho was unable to play in England until February 2015. He made his debut at under-19 level in a UEFA Youth League match against Schalke 04, but was injured after only 11 minutes. After his recovery, he began to represent Manchester City at both youth and under-21 level in the latter part of the season. He played in the FA Youth Cup final, where he scored, but ended on the losing side after Chelsea claimed a 5–2 aggregate victory. The following week he scored the only goal as Manchester City beat Porto in the final of the 2014–15 Premier League International Cup.

In July 2015, he was also included in City’s pre-season tour team in Australia. On the tour, he set up the first goal for Raheem Sterling against Roma and scored the second goal in the win against Roma in the 2015 International Champions Cup. He also set up Raheem Sterling for the 4th goal in City’s 8–1 victory against Vietnam. In City’s last pre season game against VfB Stuttgart he came on as a substitute, scoring late on in a 4–2 defeat. Due to his impressive pre-season, Iheanacho was promoted to the Manchester City senior squad. And his star has shone brighter, scoring goals with unbelievable ease.

On 10 August 2015, Iheanacho was included in a first-team matchday squad for the first time in a competitive fixture, however remained an unused subtitute in their 3–0 win at West Bromwich Albion in their first game of the Premier League season. Nineteen days later he made his competitive debut, replacing Raheem Sterling for the final minute of a 2–0 win against Watford at the City of Manchester Stadium. He scored his first competitive goal on 12 September, replacing Wilfried Bony in the final minute in a match away to Crystal Palace and scoring the only goal of the game.

THE KID IS ABSOLUTELY CLASS. LOVE YOU @67Kelechi ?

Iheanacho scored his first career hat-trick on 30 January 2016 against Aston Villa in the fourth round of the FA Cup, also setting up the 4th goal for Raheem Sterling.The following month, he was put in City’s UEFA Champions League squad at the expense of the injured Samir Nasri.

Iheanacho 894 minutes played 11 goals 4 assists, even Oscar at his best is not that good return on investment.

Iheanacho has represented Nigeria at youth levels from under-13 upwards. His first experience of a major international tournament was the 2013 African U-17 Championship in Morocco. For Iheanacho, the highlight was a hat-trick in a win against Botswana. He dedicated his goals to his mother, who died two months before the tournament. Nigeria reached the final of the competition, where they were defeated on penalties by Ivory Coast.

Iheanacho played a significant role in the 2013 FIFA U-17 World Cup, where he won the “Golden Ball” awarded to the player of the tournament. Nigeria won the competition, in which Iheanacho scored six times, including a goal in the final, and provided seven assists. In the run-up to the 2014 African Nations Championship Iheanacho trained with the senior Nigeria squad, but was released from the squad in order to travel to England to sign with Manchester City. He was part of the Nigeria squad for the 2015 FIFA U-20 World Cup in New Zealand, and featured in two matches.

Iheanacho made his first team debut as an unused substitute in a World Cup Qualifying game against Swaziland in which Nigeria won 2-0. His first start in the Nigerian national team was handed to him on the 25th March 2016 where Nigeria drew 1-1 against Egypt in an African Cup of Nations qualifying game.

Team walk today getting ready for the game comoneagles???? pic.twitter.com/jeJrRDpVNw

Kelechi Ihenacho’s worth is currently getting £116,667 annually and $2,236(September 2016 stat) from Manchester City, no one should be surprised if that value goes up hundredfold if Manchester City intend to keep through with their 2018 contract with the youngster.

Great team performance today happy to be back scoring. God is the Greatest!! https://t.co/ih1E7AhqA7

With a season performance like below, the sky might just be the starting point for the young star.