FG To Tap Iron Ore Deposits, 70% Yet To Be Tapped 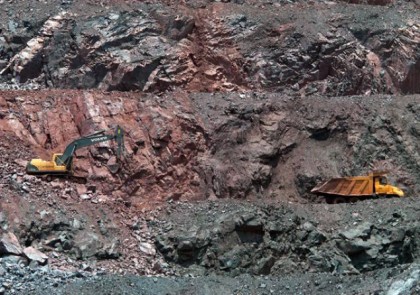 Although Nigeria is the 12th largest iron ore resource country in the world and the second largest in Africa, about 70% of the deposits are yet to be proven, a pursuit the federal government declares it is now engaging in, according to the Vice President, Prof. Yemi Osinbajo, SAN.

He said earlier today in Ilorin that the federal government “is well aware of this issue and is currently looking at options to solve the challenge, including synergising government capacity and private sector competencies for certifying existing deposits.”

Noting that steel is the world most’s important engineering material, the Vice President restated the Buhari presidency’s determination to bring about a faster industrialization process in the country through the active development of the steel sector.

According to the Vice President, Nigeria has about 2 billion metric tonnes of iron ore reserve, adding “we must be extremely ambitious in our industrialization efforts”. He explained further that the need for increased levels of investment in Nigeria, “has never been more crucial than at this period in time.”

Disclosing this at the foundation laying ceremony of Kam Steel Integrated Complex at Jimba Oja, Prof. Osinbajo stated that steel plays an important part in the Buhari administration’s economic agenda, and therefore called on other operators in the steel industry in the country to ensure Nigeria “becomes a net exporter of steel within the shortest possible time”.

The Vice President who was accompanied by the Kwara State Governor, Abdulfatah Ahmed and Solid Minerals Development Minister, Dr. Kayode Fayemi, among others, spoke to a gathering of captains of industries, financial experts, political leaders and stakeholders at the foundation laying ceremony, disclosing that as part of demonstrating its commitment to the industrial development of the country, President Muhammadu Buhari had directed that everything be done so that Nigeria can make progress in respect of ease of doing business ranking this year.

Prof. Osinbajo noted that the federal Government has been putting in place the right macro-economic policies and is working to ensure an enabling environment for business to grow in line with the Change Agenda of the Buhari administration.

Said he: “This is why the President has given clear instructions that we must make signifiant progress in the ease of doing business ranking this year”, adding “diligent efforts are being undertaken to ensure this goal is achieved, including the setting up of an inter-ministerial committee, which has since commenced work with a very keen presidential oversight.”

Earlier in his address, Vice President Osinbajo commended Kam Steel Integrated Company Ltd. for its business achievements stating that the commitment of the company is in tandem with the vision of the government to diversify the nation’s economy by encouraging the growth of local industries.

Dr. Kayode Fayemi who also spoke at the occasion described the event as historic observing that the achievement of the company was capable of galvanizing the development of the sector as a whole. He described the company as having the single-largest private investment in the nation’s steel industry.

According to him, the presence of the Vice President, “the head of our Economic Management Team,” at the foundation laying ceremony is “a demonstration of the commitment of the Buhari administration to the diversification of the Nigerian economy.

Also, the Governor Abdulfatah Ahmed commended the company for its consistent giant strides in the sector, praised it for promoting the use of 100% local raw materials and boosting employment in the state. He called on other stakeholders in the steel industry to join in the acceleration of Nigeria’s industrialization.

Vice President Osinbajo had earlier inspected Kam Steel Rolling Mills factories in Ilorin, where the company is engaged in the production of corrugated iron sheets, building wires, nails, and others before participating in the foundation laying ceremony of the new Kam Steel Integrated complex in Jimba Oja by Ganmo, Ilorin, Kwara State.

Prof. Osinbajo on arrival in Ilorin paid a courtesy visit on the Emir of Ilorin, Alhaji Dr Ibrahim Sulu Gambari where he congratulated him for the business feat being achieved in the Emir’s domain, which brought him to the State on an official trip. The Emir in his response commended the efforts of Federal Government at tackling the nation’s numerous challenges particularly the herdsmen-farmers conflict.

Also present at the ceremonies were the deputy governor of Kwara State, Elder Peter Kishira, members of Kwara State Executive Council, the CEO of Kam Industries, Alhaji Kamorudeen Yusuf, representatives of the Minister of Trade, Industry and Investment, Bank of Industry, Wema Bank, CEOs of some government parastatals in the sector, captains of Industries, religious leaders and traditional rulers among others.