RE:Disquiet In The War Front As Soldiers Complain of Unpaid Allowance 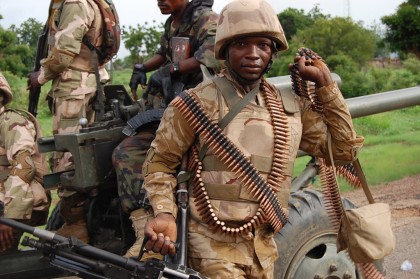 The attention of the Nigerian Army has been drawn to some stories going round the media circles with the title “Disquiet in the war front as soldiers complain of unpaid allowance” alleging that there was problem in the Nigerian Army due to non-payment of allowances to some soldiers serving in the North East.

In particular, they were alleging non-payment of outstanding peacekeeping operations allowance of troops that served in Guinea Bissau under the auspices of the Economic Community of West African States and operation allowances to some troops in counter-terrorism and counter-insurgency operations, among others.

The issues contained in such publications are not true nor correct. While some media treated the matter professionally, giving the military benefit of doubt and sought to know the truth, others mischievously went to town with the false story without recourse to ethics of the profession and bothering to find out from the military.

The effort of the former is quite commendable and really appreciated, while that of the latter is quite unfortunate.

For the avoidance of doubt, we wish to inform the public that the issue of non-payment of peacekeeping operations allowance is a minor internal military administrative matter which was treated and resolved accordingly and has no bearing on the fight against terrorism and insurgency as they mischievously alleged.

It should be reiterated that the alleged non-payment of operations allowance among the returnee peacekeepers was due to administrative hitches which was solved to the point that all outstanding peacekeeping operations have been paid and the last batch payment was done last Tuesday.

As regards to payment of operations allowances, the NA had earlier inform the public of the compliance with the Federal Government directives on e-payment, BVN and TSA. All officers and soldiers are now paid their operations allowance directly through their bank accounts.

All those that did not receive theirs was due to non-compliance with the directive of giving correct account details and issues relating to recent postings. This has been explained to all those affected and efforts were on to rectify same shortly.

Our troops have been receiving their allowances regularly. Already issues relating to troops welfare have been of utmost priority to Mr President and the Army leadership. This is evident in current very high level of morale of the troops.

We would like to once again thank those responsible media outfits that showed understanding and maturity in reporting issues of national defence and security professionally.