Our Problems Are Temporary And Solvable – VP Osinbajo

Vice President Prof. Yemi Osinbajo, SAN, has restated the resolve of the Buhari administration towards instituting a new culture of probity and accountability in governance saying “it’s a new day in Aso Rock”. 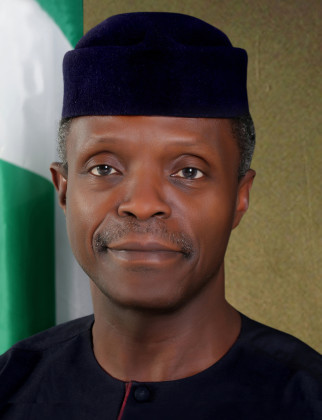 “Nearly a year on- there are many problems and many have asked where is the change? Is this the change we voted for? Even some fifth columnists in our midst have suggested bring back corruption,” according to the Vice President while speaking today at The Platform, a public engagement forum organized by the Covenant Church led by Pastor Poju Oyemade.

“It’s a new day in Aso Rock … today we have the best opportunity in decades for profound change. It is an opportunity in a generation. A revolution whose time has come!”

Continuing Prof. Osinbajo then declared matter-of-fact that “the government of President Muhammadu Buhari is completely and irrevocably committed to change. ”

He said “we believe that though it may not be easy, though the early signs may be confusing and sometimes discouraging, there has never been a better opportunity than now to turn the country in the direction of success.”

According to him, “it’s a new day in Aso Rock … today we have the best opportunity in decades for profound change. It is an opportunity in a generation. A revolution whose time has come!

The Vice President added that “everything around us tells us that the moment is now! Can this change happen? Yes it can! Yes it must! What do you have in your hands to make it happen? We have a country that is tired of corruption, tired of leadership without values, tired of an economy that is neither designed to accommodate enterprise, nor to create opportunity and wealth for the majority. ”

The “new day in Aso Rock” he said is that of a Presidency that is committed to ensuring a departure from the past culture of corruption and profligacy in government, even as he averred that “the government of President Muhammadu Buhari is completely and irrevocably committed to the Change promised Nigerians”.

Speaking on the theme ‘What do we have in our hands, tapping into dead capital” Prof. Osinbajo opined that “We have a leadership, a leader that is ready to challenge the rotten system, one that has said he is ready to kill corruption rather let corruption kill us.”

“We believe that though it may not be easy, though the early signs may be confusing and sometimes discouraging, there has never been a better opportunity than now to turn the country in the direction of success, ” says the VP.

Addressing a large gathering of mostly young Nigerians, Prof Osinbajo told the youths that the Federal Government was not unaware of the nation’s challenges, but stated that the youths must believe the problems facing the nation in the area of power, availability of petroleum products, infrastructure and agriculture are surmountable and resolvable.

Vice President Osinbajo also told them of the determination of the Federal Government to leverage technology under a number of initiatives he unveiled intended to create the enabling environment that would stimulate youth entrepreneurship and innovation.

He stated that “the key to change and our future prosperity lies in innovation and is critical to our development”.

Informing the forum of the Buhari presidency’s for technology and innovation, he stated that government would be establishing an Innovation Fund this year which would deploy significant resources for the aim of creating opportunities to the youth to access fund for innovation and entrepreneurship.

He highlighted other plans as follows:
– Establishment of technology innovation hubs across the country; 2 super hubs ( in Lagos and Abuja) and 6 regional hubs in the six geo-political zones in partnership some major technology companies;
– 65,000 young Nigerians to be trained in hardware and software services and in animation;
– to create a reservoir in technology capacity that can be exported annually abroad like the case of India;
– on June 23, 2016, Federal Government would launch a Presidential Technology Innovation Initiative targeted at 50 Nigerians engaged in innovative start-ups to be mentored by major technology innovation companies
– bursary award to 100,000 STEM undergraduates developing their interest in programming, robotic and animation technology, in addition to deploying technology in the training of the 500,000 teachers that are expected to be employed under the social investment of government this year,
– VP’s Office to institute a literary prize in poetry and short stories during independence anniversary to encourage field of humanity/arts

Prof. Osinbajo also used the occasion to implore millions of youths in the country to join the vanguard for change under “a New Tribe of Nigerians” saying “we must not blink, no shaking until we turn this country around.”

Earlier, the Vice President commended the conveners of the platform, Pastor Poju Oyemade and his team for their tenacity and unwavering belief in the nation’s development. He noted that “the Platform has through the years become a foremost opportunities for ideas and intellectual innovations in Nigeria.”