The Minister of Information and Culture, Alhaji Lai Mohammed, has restated Federal Government’s commitment to supporting and elevating the nation’s numerous festivals to enable them to contribute their quota to national development, while also preserving Nigeria’s rich cultural heritage. 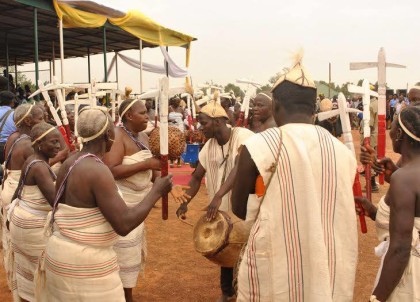 The Minister said this on Saturday in Mangu, Plateau State, when he attended the Puus Kaat Festival, an annual gathering of sons and daughters of Mangu to showcase their rich cultural heritage.

“The reason we are working hard to give national and international prominence to our festivals and also support our creative artists is because of their potentials to contribute to the growth of our GDP, provide jobs as well as foster peace and unity.

”The Arts and Culture, as well as Tourism sectors are the only ones that are capable of providing opportunities, including jobs, to those who ordinarily would not have been employable, perhaps because of their lack of education. That is why we say the sectors are pro-poor, pro-the-underprivileged and pro-rural. These are the only sectors that import the market to the products,” he said.

Alhaji Mohammed said the Puus Kaat Festival, which came a day after the conclusion of the National Summit on Culture and Tourism organised by his ministry, is set to benefit from the far-reaching resolutions made at the summit that included enlisting of festivals into a national calendar, as well as training of festival managers and creative artists.

“It is significant that this festival is coming just one day after we concluded a well-attended National Summit on Culture and Tourism in Abuja. Part of the decisions taken at that summit is to ensure that every local government in Nigeria celebrates at least one festival a year, in our efforts to build a national calendar of festivals that will attract people from within and outside Nigeria, just like we have at the Rio Carnival in Brazil and in Edinburgh, Scotland, just to mention a few.

“Also, it was decided at the National Summit that we must build the capacity of the managers of our various festivals through training and re-training by resource persons. I want to assure you that the organizers of Puus Kaat Festival will be among those to benefit from this training. We will also build the capacity of creative artists and adequately equip our various arts and crafts centres across the nation to enable them function more effectively. We will then follow up by creating local and international markets for the products,” he said.

It was the second time within a month that the Minister was witnessing a festival in Plateau state, after also attending the Nzem Berom Festival in Jos, on April 15th 2016.

The main attractions of the Puus Kaat Festival are traditional dance parade, display of various arts and crafts of the Mangus people as well as showcasing of the Mangu people’s prowess in hunting and farming.