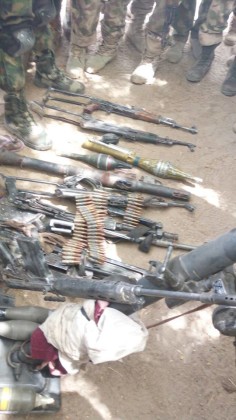 Troops of 3 Battalion 22 Brigade, have today carried out a successful pre-emptive strike to foil a planned Boko Haram terrorists attack on the military and innocent civilians around Wunbi in Kala Balge Local Government Area of Borno State.

The pre-emptive attack was carried out after information was received about the devilish intention and location of the terrorists. While on a patrol to foil the attack troops encountered the terrorists at Tatakura village 20km South West of Wumbi. There was heavy exchange of fire at the end of which 9 Boko Haram terrorists were killed.

Unfortunately, 6 of our troops sustained gunshot wounds and have been evacuated for treatment. They are all in stable condition and responding to treatment.

Citizens are once again requested to always provide any useful information they have about suspected persons to the security agencies.