A Tale of a Rogue Currency 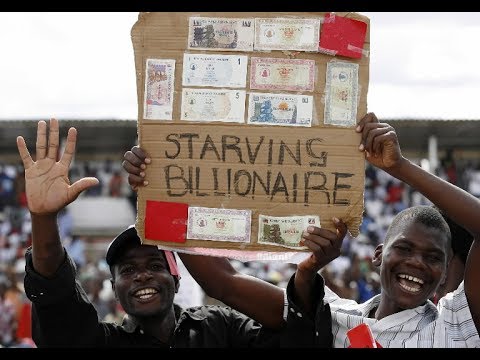 The Zimbabwe dollar was introduced in 1980 to directly replace the Rhodesian dollar at par (1:1) and at a similar value to the US dollar. Hyperinflation in Zimbabwe reduced it to one of the lowest valued currency units in the world. It was re-denominated three times (in 2006, 2008 and 2009), with denominations up to a $100 trillion banknote. The final re-denomination produced the “fourth dollar” (ZWL), which was worth 1025 ZWD (first dollars). And the confusion with that currency has never stopped.

Zimbabwe’s central bank says Friday it will print its own version of the US dollar to ease an acute shortage of hard currency in the crisis-hit African country. Reserve Bank of Zimbabwe Governor John Mangudya announced that new “bond notes” pegged to the value of the dollar will be introduced within the next two months, bearing face values of $2, $5, $10 and $20. With all these printing, one still wonders if Zimbabwe still does not get it – we all thought they have done enough printing of money already, and it has never worked.

In Chris Skinner memoir to Zimbabwe during the country’s economic ridiculousness, he wrote – we had a few days out at the magnificent Victoria Falls. An amazing natural wonder of the world, particularly from the Zimbabwean side of the falls where you can walk the 1.8 kilometres opposite the massively flowing waters.

I mention this because I’ve known about Zimbabwe’s currency explosion for a while, but seeing the aftermath of the currency’s implosion it shows how money makes the world go around … or not, as the case may be.

In Zimbabwe’s case, the country has gone through a particularly notable slump. Back in the day when they changed the name of the country from Rhodesia to Zimbabwe, 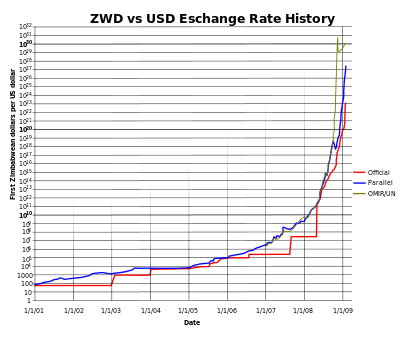 the Zimbabwe Dollar (ZWE) was worth USD$1.47 but, by 2006, the ZWE was already becoming worthless, effectively trading at just over half a cent of a US dollar to the Zimbabwe dollar. Like this was not bad enough, then it got really worse, a lot worse, as the economic situation worsened and hyperinflation kicked in.

The result is that the government issued four rounds of currency devaluations ending with the final laughable situation of issuing a 100 trillion dollar note (worth around US$300 when issued). Infact, everyone in Zimbabwe that can afford a modern TV is a Quintillionaire,

Now that may be funny, but it actually means in practice that Zimbabwe no longer uses Zimbabwe currency for trade. The problem with this is that they don’t have enough of these foreign notes in circulation so you either tip a porter or driver $10 or don’t tip at all. It also means there’s a massive trade in selling old bank notes that no one really needs.

As we walked the main street of Victoria Falls town which comprises a mere five or so souvenir shops, we were rapidly pounced upon by touts selling everything from wooden carvings to jewellery. More often than not though, they were selling money. 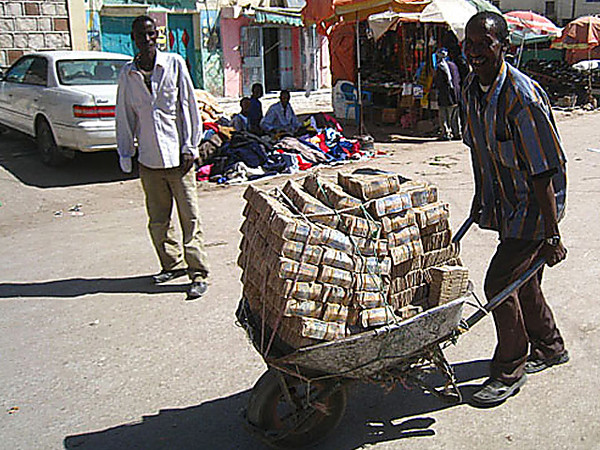 One wonders why this fellow is not accompanied by Security forces

Every guy on the street would hold out a wad of notes, many well used notes, and ask for US$20 to take them as a souvenir. You then haggle and barter and pay about US$5 to take the things off their hands.

In some ways, I bought a lot of these notes as I felt sorry for the chaps – one guy hassled me non-stop for about ten minutes and I eventually said that we were leaving that day so could not buy any more stuff.

He said: “You’re leaving today? Well maybe you have some old T-shirts or pants you could give to me? I don’t mind
how old sir. I’ll wait outside your hotel.”

That’s how poor that economy is today.

So buying a few old dollars with US dollars wasn’t such a big deal.

The big deal is actually made about the 100 trillion dollar note however.

Many were issued, but these are the prized notes of the townsmen who would ask if I wanted to buy old Zimbabwean dollars.

I’d say not, I’ve got loads of them already and then one or two of them would pipe up: “but do you have this note, the big one?” and would hold up the rarer 100 trillion dollar note in pristine condition.

Sure enough, I got suckered into buying one for US$10 … only to find you can buy them uncirculated in mint condition at the airport. The airport of all places! The airport has books of 100 trillion dollar new notes, selling for US$17 – well it is the airport shop and not street seller.

The move to print the USD equivalent comes seven years after Zimbabwe stopped printing its own currency, the Zimbabwe dollar, due to hyperinflation. The country’s inflation rate rose so dramatically in 2009 that paper money became practically worthless.

Rampant inflation and the collapse of the economy severely devalued the currency, with many organisations using the United States dollar, the euro, the pound sterling, the South African rand, or the Botswana pula instead. In the early 2000s, Zimbabwe started to experience hyperinflation. Inflation reached 623% in January 2004, then fell back to low triple digits in 2004 before surging to 1,281.1% in 2006.

Inflation reached another record high of 3714% (year-on-year) in April 2007. The monthly rate for April 2007 exceeded 100%, implying that inflation may soon exceed all forecasts, as 100% monthly inflation over sustained 12 months would produce annual inflation of over 400,000%. Mid-year inflation for 2007 has been breaching records as inflation for May 2007 was estimated at 4,530% (year-on-year). Within two months, unofficial inflation had reached 11,000%, and the black-market exchange rate with the British pound was Z$400,000 per £1.

On 13 July 2007, the Zimbabwean government said it had temporarily stopped publishing (official) inflation figures, a move that observers said was meant to draw attention away from “runaway inflation which has come to symbolize the country’s unprecedented economic meltdown.”

On 27 July 2007, the Consumer Council of Zimbabwe (CCZ) said its recent calculations for the monthly expenditure for an urban family of six showed that inflation for the month of June was more than 13,000%. The Central Statistical Office (CSO), the official source of Consumer Price Index numbers, had not released its figures since February (2007) when it reported annual inflation at 1,729%.

Like this was not enough, then hyperinflation kicked in. Moffat Nyoni, the chief statistician of the Central Statistical Office, announced that the inflation rate would no longer be calculated after November 2007, due to the lack of availability of basic goods and the consequent lack of information from which to calculate the inflation rate. The International Monetary Fund stated that inflation was predicted to rise to 100,000% per annum. His office continued calculating past inflation rates, announcing in February 2008 that December had seen 66,212.3% inflation and an exchange rate of Z$7.1 million per US$1, while the January inflation rate had risen to 100,580.2%. Official rates rose to 164,900.3% in February, and 355,000% in March, and unofficial rates surpassed one million percent in May (the Central Statistical Office again having given up because of the lack of goods). The office resumed estimates in early winter, announcing June rates of 9,000,000% percent, and nearly a quarter billion percent in July.

Since February 2009, following a period of hyperinflation and widespread rejection of the devalued currency, companies and individuals are permitted to transact domestic business in other currencies, such as the US$ or the South African rand. In consequence, the Zimbabwean economy has undergone dollarisation and the Zimbabwean dollar has fallen out of everyday use.

The African country has been using a basket of currencies since then for daily transactions, including the US dollar, the South African rand, the British pound and the Chinese yuan.

A shortage of dollars – by far the most widely used currency in Zimbabwe – has led to queues forming at some banks and ATMs in recent weeks.

“We are still working on a design, which will be sent for printing outside the country. The notes will not be introduced immediately but probably within the next two months,” he told the Zimbabwe Herald newspaper.

The central bank also capped the daily withdrawal limit to $1,000 to ease the cash crunch.

Mandugya added: “This does not signal the reintroduction of the Zimbabwe currency. The fundamentals are not yet right for its comeback. This is just a measure to curb illicit flows out of the country.”

We all hope he is right this time.