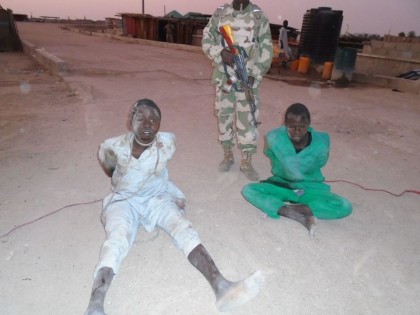 As a result of ongoing onslaught against the Boko Haram terrorists in Sambisa forest, the terrorist group has now devised a means of identifying themselves.

In this regard, the Boko Haram now wear uniform to blend among locality undetected where they sadly carryout their heinous crime. The recent apprehension of 2 Boko Haram terrorists in uniform near Dikwa in Borno State, is a pointer towards this direction.

While the military would sustain the current tempo to further decimate the terrorists, the military is advising the recalcitrant remnant Boko Haram to surrender now and get humane treatment in line with the world best practice.
The members of the public are hereby urged to be wary of this new development and be always alert. Any suspicious persons or object should be reported promptly to the security agencies.

It will be recalled that recently the Nigerian troops, #OperationLafiaDole is leaving no stone on turned in the Sambisa forest where the terrorist have their strong base, both administratively and operations.

In the recent past the Boko Haram terrorists have a field day of operation, where they go to selected towns or villages somtimes on notice and operate for several hours with any help from the Nigerian troops of the previous administration.

Instead now, in the present FG led by President Muhammadu Buhari, the Nigerian troops are after the Boko Haram terrorists in their hiding places to smoke them out.