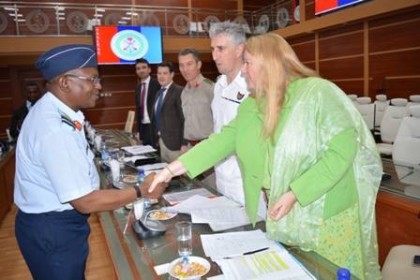 The United Kingdom has restated her commitment to assist Nigeria in her quest to totally eradicate the threat posed by the Boko Haram Terrorists in the North East of Nigeria as well as partnering with relevant agencies to rehabilitate the Internally Displaced Persons (IDP) who were victims of terrorists attack.

This was jointly stated by the Director General for the British Foreign and Commonwealth Defence Intelligence, Ms Sarah Macintosh and Rear Admiral Simon Ancona, the British Assistant Chief of Defence Staff in Defence Engagement when they led a 5 man delegation to the Defence Headquarters Abuja.

In her opening remark, Ms Macintosh applauded the commitment of the Nigerian Armed Forces in decimating the dreaded Boko Haram Terrorists and seek for closer military ties in the area of security for the IDPs and cooperation to provide complementary support to the Nigerian Government relief efforts to ameliorate the humanitarian challenges in the various IDPs camps across the country.

Similarly, Rear Admiral Ancona expressed the British desire to assist the regional Multi National Joint Task Force (MNJTF) in the military campaign against Boko Haram and contribute to the establishment of a Multi National Joint Task Force coordination centre. He further stated that the British Government had concluded plans to send some specialists to assist in tackling the humanitarian crisis occasioned by the insurgency in the North East of Nigeria. The British delegation also acknowledged the tremendous efforts of the military in not only winning the war against insurgents but also “winning the peace” in the country.

In his response, the Chief of Defence Staff, (CDS) General Gabriel Abayomi Olonisakin thanked the UK delegation for the visit and solicited for a more fruitful cooperation with the British government. He also briefed the delegation on the ongoing efforts by the military to de-radicalise the youths in the North East who were hitherto susceptible to the radical Islamic group, Boko Haram. The CDS, who was represented by the Chief of Policy and Plans, Defence Headquarters, Air Vice Marshal BC Saidu, also explained the transitional arrangements to resettle the IDPs and noted that the greatest military challenge hampering the fight against the Boko Haram Terrorist is that of inadequate equipments and lack of cooperation from some arms vendors.

Others in the entourage of the British Director General for Foreign and Commonwealth Defence were the British Defence Attache to Nigeria and two senior diplomats from the UK embassy, while some principal Staff Officers from the Defence Headquarters were at hand to receive them. Highlights of the visitation included a group photograph and exchange of souvenirs.