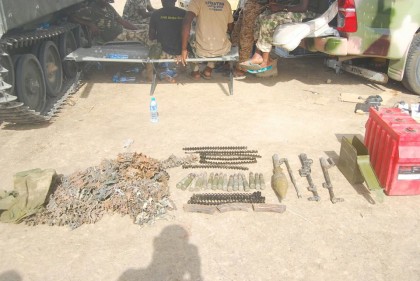 The troops of 21 Brigade, 7 Division, have continued their offensive operations against the Boko Haram terrorists still hiding in the Sambisa forest.

On Sunday 8th May 2016, the troops have cleared 4 villages in the terrorists enclave which include Bala Karege, Goske, Harda and the famous Markas 3. There was no encounter with the terrorists in all the villages as the Boko Haram terrorists have abandoned their huts and ran away.

Unfortunately, the troops ran into an ambush at Harda village, while advancing. The resilient troops successfully cleared the ambush without any casualty and proceeded with the operations.
The formation recovered suicide vests and quite a number of high calibre weapons which include; 1 Rocket Propelled Grenade (RPG) Bomb, 18 rounds of 23mm Shilka ammunition, 1 Barrel of AK-47 rifle, 1 Extra-barrel of General Purpose Machine Gun (GPMG), 3 AK-47 rifle magazines, metal link of 12.7mm ammunition and a heavy-duty solar panel battery.
The troops also recovered 10 vehicles and 50 motorcycles belonging to the fleeing terrorists. 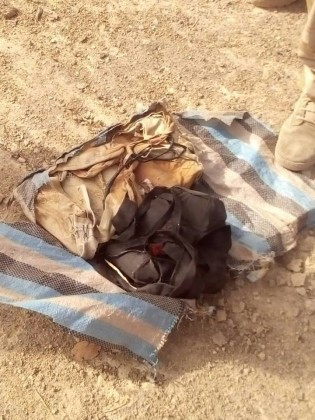 In a related development, Boko Haram terrorists from another part of Sambisa forest, were reported to have taken advantage of the heavy downpour that occurred to move closer to the troops.

However, the troops were very vigilant as they decisively and successfully dealt with the intruders. So far, 2 vehicles were recovered from Boko Haram terrorists and over 8 Boko Haram terrorists bodies were counted before nightfall.
There is possibility of recovering more by day break. We shall get you more details as the operation progresses.