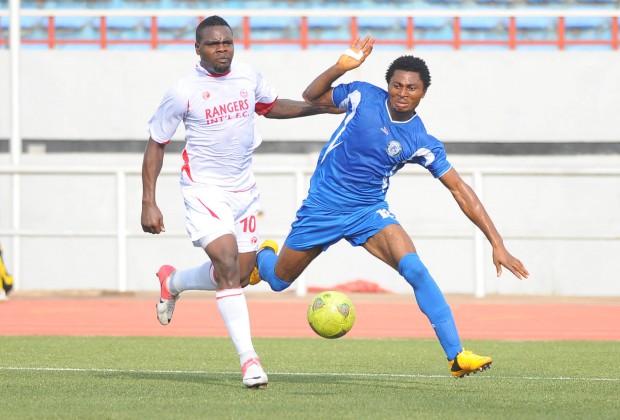 Seven home wins, two draws and a fixture to be played on Monday summed up Match Day 17 of the Nigeria Professional Football League (NPFL) as Rangers International kept their place at the top smashing Ikorodu United 4-1, with Wikki, Wolves and Lobi securing crucial wins.

Rangers hit four past struggling Ikorodu United, in what would could be regarded as a morale boaster for the Enugu side that have not been inspiring in the past three of match days.

The Flying Antelopes took the lead in the 11th minute, when Nedum Francis turned the ball into his own net.

Tope Olusesi added to Rangers’ advantage five minutes later, when he combined nicely with Chisom Eguchulam. Olusesi got his brace in the 21st minute, before the visitors pulled one back two minutes later through Moses Ebiye. Obinna Nwobodo volleyed in the fourth five minutes before stoppage time.

At the Warri Stadium, Warri Wolves defeated Sunshine Stars of Akure 2-0. Sikiru Alimi got the goals in the 55th and 59th minutes. Ubong Ekpai’s curled in the winner as Akwa United got past visiting Nasawara United at the Godswill Akpabio International Stadium, Uyo.

Plateau United and El-Kanemi Warriors shared points in Jos. Daniel Japhet rose highest to nod in Chinedu Ohanachom’s cross in the 67th minute to give El-Kanemi the lead before Reuben Bala restored parity for Jos side, Plateau United eight minutes to time. 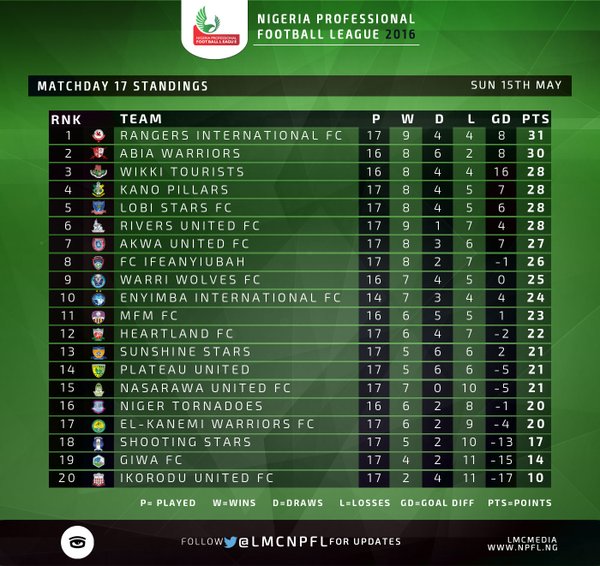 Tony Okpotu and Emmanuel Ajia secured the goals for Lobi Stars in their 2-0 over Giwa FC. Olaha Michael fired home the winner as Abia Warriors edged Rivers United 1-0 in Umuahia.

In Bauchi, Godwin Obaje’s hat-trick proved crucial as Wikki Tourists stunned Shooting Stars of Ibadan 4-0. Obaje struck first in the 61st minute, before adding the second in the 75th. Saidu Abdullahi grabbed the third in the 86th minute, before Obaje secured his third from the spot with a minute to regulation time.

Kano Pillars and Heartland FC fired blanks at the Sani Abacha Stadium, Kano. In the game played earlier on Saturday, champions Enyimba FC cruised to 2-0 at home to FC Ifeanyiubah. Daniel Etor and Ikechukwu Ibenegbu got the goals.

The game between MFM and Niger Tornadoes will hold on Monday, following heavy downpour at the Agege Stadium on Sunday. Rangers lead the log with 31 points.