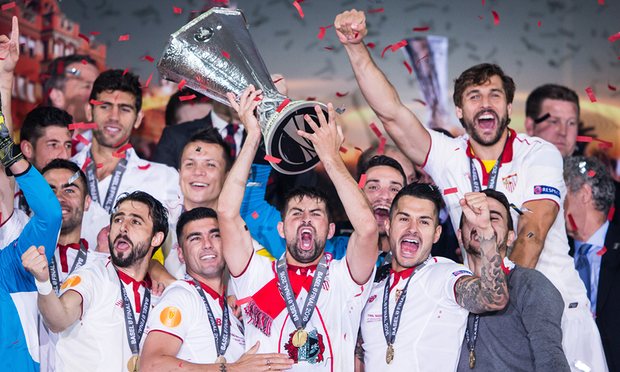 A stunning second-half comeback, featuring a goal for Kevin Gameiro and two by Coke, gave the Spanish side a third straight final win and a fifth title overall.

Sevilla continued their reign as kings of the UEFA Europa League as a rousing second-half fightback proved too much for Liverpool at Basel’s St. Jakob-Park and secured them an unprecedented third straight title in the competition – and a record-extending fifth overall. 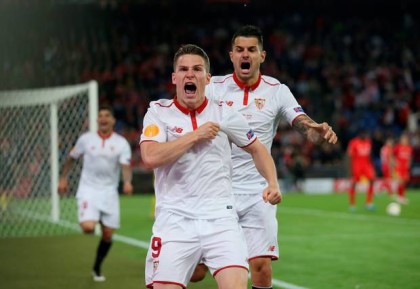 Sevilla were in their third successive final whereas Liverpool had not appeared in a European showpiece for nine years – yet there was little sign of nerves from the English newcomers. Emre Can forced the first save of the evening from David Soria before ten minutes had been played, then Daniel Carriço acrobatically cleared a Daniel Sturridge header off the line.

Roared on by a fair portion of the crowd, Liverpool kept coming, with Soria quickly off his line to block another Sturridge effort. The Sevilla goalkeeper was helpless in the 35th minute, however, as Roberto Firmino found Sturridge again inside the penalty area; the striker supplied a sumptuous finish with the outside of his left foot and Liverpool were in front.

Jürgen Klopp’s side piled on the pressure in a bid to extend their lead, Carriço making another important block to deny Adam Lallana before the break. Sevilla were clinging on – yet 17 seconds into the second half they were level.

A weak headed clearance from their former full-back Alberto Moreno gave Mariano Ferreira an opening and the winger burst into the penalty box before crossing low for Kevin Gameiro in space to notch his eighth UEFA Europa League goal of the season from a metre out. 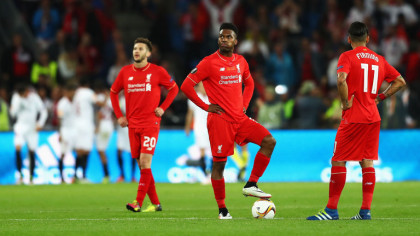 The goalscorer was then thwarted by Kolo Touré’s sliding tackle as he threatened to burst clear and then mis-hit a volley straight at Simon Mignolet having been left unmarked.

Sevilla, however, would make their dominance count. Vitolo and Éver Banega played a one-two on the edge of the area before Coke burst on to the ball to curl brilliantly beyond Mignolet.

Six minutes later, the ball broke for the Sevilla midfielder inside the box and once more the finish was unerring, ensuring the trophy would head to Seville yet again.

Official man of the match: Coke (Sevilla)
Captain marvel and Sevilla’s hero, Coke is not a natural goalscorer. His 169 games for Sevilla before tonight brought a grand total of 13 goals. What a time to discover your shooting boots! A right-back by trade, he has been used in midfield this term and twice he turned up in the right place at the right time. Disappointed to be a substitute last season, here he scored two and lifted the trophy. A dream night.

“The technical observers chose Coke as man of the match for his impressive leadership on the field and the decisive part he played in the game by scoring Sevilla’s second and third goals.” Ioan Lupescu, UEFA chief technical officer
The man of the match, in association with Hankook, was selected by the UEFA technical observers: Jacques Crevoisier (France), Stefan Majewski (Poland), László Szalai (Hungary), Ginés Meléndez (Spain), Sir Alex Ferguson and Ioan Lupescu (UEFA)

Sevilla do it again!
Sevilla’s sustained success over the past 11 years has been nothing short of remarkable, but the fact they have done it amid constant rebirth makes it doubly so. Sergio Ramos, Jesús Navas, Dani Alves, Adriano, Ivan Rakitić, Júlio Baptista, Carlos Bacca – all have been snapped up by wealthier clubs but, like the salamander, Sevilla have the ability to regenerate limbs and come back stronger. Sporting director Monchi says Unai Emery is the “victim” of this model; as he equals Giovanni Trapattoni’s record for wins in this competition, he does not appear to be complaining.

Gameiro is the main man
Gameiro was in danger as being typecast as a super sub early in his Sevilla career but, now 29, he has taken centre stage. He has grabbed the mantle from Bacca following his move to AC Milan last summer and led the line brilliantly at St. Jakob-Park, his pace and power causing problems whenever he was on the ball. France must be among the UEFA EURO 2016 favourites if Didier Deschamps can afford to overlook him.