The National Working Committee (NWC) of the All Progressives Congress (APC) led by the party’s National Chairman, Chief John Odigie-Oyegun on Thursday met with the party’s state executives and a high-level federal government delegation led by the Secretary to the Government of the Federation (SGF), Engineer Babachir David Lawal on the new petroleum products supply and pricing framework introduced by the federal government. 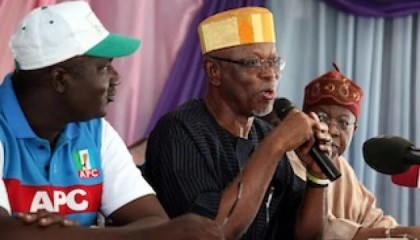 Comments by APC National Chairman, Chief John Odigie-Oyegun:
Our meeting today is very unique because we are coming together as a government and as the governing party to exchange ideas. To ensure that both party and government are on the same page in a lot of the very critical and important issues that are taking place in our nation today. The main benefit of course, is that we want a situation where party leaders from all over the country do not form their opinions on the basis of newspaper publications because you are at the heart of governance.

What this does is to arm everyone of us from the national level and state level so that we can speak authoritatively about what is going on at the national level and go away with the conviction that things are not just happening capriciously. With the conviction that we promised change but change is a process, it is not an event, not something that happened the day after the government was sworn-in.

Comments by Secretary to the Government of the Federation (SGF), Engineer Babachir David Lawal:
In ten days time the APC government led by President Muhammadu Buhari will be one year in office. In these 12 months quite a number of key decisions have been taken. Remember that the spirit behind the formation of the APC and indeed the drafting of the its constitution is that the party will be a very consultative one and that every now and then the party, the executive branch of government will interact with the political arm of govt that is the party itself.

Along the line, key decisions have been taken by government, it has not been possible that every time such key decisions were taken the party will be consulted. Nevertheless, the president has tried to at every step of the way consult quite a few of the key members of our party.
One of the major decisions that the government has taken of recent time is the removal or the deregulation of the pricing mechanism of the downstream sector of the petroleum industry.

Comments by Minister of Information and Culture, Alhaji Lai Mohammed:
It’s important that we get the concept of liberalization very well because this is not about subsidy removal. In the 2016 budget we made no provision for subsidy and you cannot remove what was not there. Secondly, we did this because in 2015 alone, we paid over one trillion Naira in subsidy and one trillion Naira in subsidy is 1/6 of the entire national budget so we agreed that we are not going to put subsidy. So what we did was not removing subsidy but actually liberalization but we had to do it because if the country is to survive we do not have an option.
We do not have an option because the regime before now talking about the fuel regime, was based on a process where some licensed oil marketers would go to the central bank and open a letter of credit. When a letter of credit is opened they bring in the fuel but unfortunately the price of crude which accounted for over 70 per cent of our fuel exchange crashed from an all-high level of 100 dollars to under 30 dollars, As a matter of fact for some parts of this year we sold crude for 28 dollars.

It’s just like somebody who had been earning 100,00 Naira a month suddenly his salary is reduced to 30,000 Naira he will need to make some very painful adjustments so the truth of the matter is that we have to do this because there is no availability of foreign exchange. We don’t have sufficient foreign exchange to open letter of credit for anybody that wants to bring in fuel.
Last month, I was informed that the total amount of foreign exchange available to Nigeria was 550 million dollars and NNPC needed 500 million out of it so you can see why it’s not working.

Since October last year, 90 per cent of the petrol that has been brought in till date was brought in by the NNPC because all the major independent marketers have refused to bring in petrol. Why? Because they said they had no access to foreign exchange and we can’t expect them to buy foreign exchange on the open market and sell N86.50.

So NNPC had to step in not because NNPC also had foreign exchange. What NNPC had been doing is that they had been exchanging the 445,000 barrel of crude allocated daily for local refining and it has engaged in a transparent process called DSDP-Direct Sale Direct Purchase. It now gives this 445,000 of crude a day and changes it for petrol to come to Nigeria but even that has its own disadvantages.

The first is that the 445,000 barrels of crude even if we get all of it to change for petrol, accounts for only 48 per cent total daily consumption for the country. What NNPC had been doing since October is to dip into the crude meant for the federation account to supplement the DSDP.
The implication is that it deprives the federation account money that would have accrued to them which would have been divided between the federal government, state and local government. If you notice last month in the history of this country the least amount was distributed — N299 billion between the three tiers of government. So this new price regime is not about an option. It is not as if this is option A,B or C it is about saying look we must face reality. We must be courageous enough to take decisions that in the long term will benefit Nigerians.

The first thing Mr President told us as ministers was that if you cannot bring relief to Nigerians don’t add to their problems. So everything Mr President has been doing he has always had in mind the poorest of the poor. That is why there are so many no-go areas. We can’t retrench, because Mr President believes that retrenchment will only bring hardship go Nigerians.

Mr President has tried every option and deregulation is in the overall interest of the poorest of the poor and I’ll tell you why. Outside Lagos, Abuja probably Kano, where have we been buying at N86.50?
In the South-East, North-West, South-South, our people had been buying fuel between N150-N200 per-litre in the last two years and when scarcity comes it jumps to N300. Even for those of us who think we had been buying fuel for N86.50, at what cost? Our drivers sleep at the petrol stations for two nights so that is why the government said given the reality it would be better to save Nigerians this hardship.
Again, the increased insurgency and vandalism has not helped matters. From 2.2 million barrels of crude which we budgeted for, today because of vandalism we can only produce 1.4 million barrels which means we are losing 800,000 barrels every day due to vandalism. What this translates to is that there is less money for the federation account, less foreign exchange and that is why we had to take this decision.

What did we do? We simply invited all the stakeholders asked why they had not been bringing in fuel and they told us we cannot because we have no access to foreign exchange. And we asked them what are the options and they advised us if they could be allowed to source from the subsidiary market then we can sit down together and work out with them

What is the cost of dollar in the market? They gave us then we added transportation, insurance, logistics and we said given this you can still make a profit if you sell between N135-N145.

Let’s look at the benefit for Nigeria and for the common man. The first benefit for Nigeria and for the common man is that it will permanently eradicate subsidy and all corruption associated with subsidy.
In 2015 alone, over 1 trillion Naira was paid for subsidy. Even our own administration had to go to the National Assembly for a supplementary budget, a subsidy component of N522 billion. When this system becomes operational we are not going to pay anybody subsidy which means we can use that money for growth, education, health.

Secondly, this price regime guarantees availability of product everywhere in Nigeria at all times. It is very clear that this new price regime will also strengthen and make our government at every level much more viable because that crude belongs to a federation account which NNPC had been using to supplement the fuel system will cease and then there will now be more money for the three tiers of government to share.
Thirdly, this price regime is going to encourage more investment in refineries and in downstream sector. Days ago thirty-seven companies were jostling to invest in refineries in Nigeria just because we opened up the sector.

Again, this price regime will lead to creation of more jobs because when people invest in refining there will be more jobs and it will also save existing jobs. We can see a minimum of 200,000 new jobs being created and save existing 400,000 jobs. Those are the benefits of this new price regime.
People will ask you, but how do you soften pain and there are two answers you must give them: number one is that in the long run, jobs are available, our people don’t have to sleep at the petrol stations it softens their pains.

Secondly, like all systems when these things are first introduced, the price will go up but it will definitely come down, it is about market forces. Again, this is the only government that out of its own conviction, love for the poor people made available half a trillion Naira in the budget to take care of the common man. This is the social intervention project we have and they will ask you what are they?
The first is the employment of 500,000 unemployed graduates. The second is the employment of 100,000 non graduates, technicians and artisans. The third is the one meal a day programme targeting 5.5 million pupils all over Nigeria. This is the most exciting of all our programmes. Even if we are going to give these children one egg a day it means we will need 5.5 million eggs and in a calendar year of 200 days we will need over a billion eggs. You can imagine what this will do to agriculture.

Fourthly, we have the enterprise scheme which is a system of revolving loan. We are targeting one million market women and men, 460,000 artisans and technicians and 200,000 agricultural workers to be given loans through their cooperatives to start their own businesses.

Finally, we have the 5,000 conditional cash transfers to one million most vulnerable Nigerians as a first phase. Then finally we have bursaries, scholarships for all students in Nigeria studying science, technology, engineering and mathematics.
I must tell you that even Labor is impressed with this and we are already working together with them to ensure that this thing is implemented faithfully.