Arowobusoye SamuelMay 20, 2016 10:23 am 0
Jussie Smollett AKA Jamal,  caused a stir yesterday by suddenly announcing that he’s leaving Empire after this week’s cliffhanger season finale, but there seems to be more to the story than we originally thought. 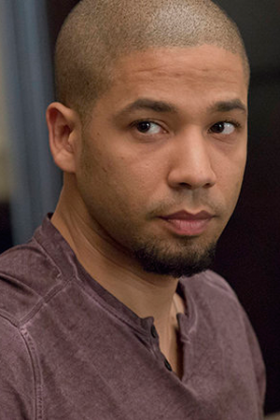 The breakout star sparked rumors that he was done with the show by posting a somewhat cryptic tweet yesterday bidding adieu to the show, and then another one about being careful how you treat people.
While the season finale of Empire left both Jussie’s fate and that of his character Jamal Lyon, who was shot in the final minutes of the episode, in limbo, according to EW, Jussie isn’t going anywhere unless FOX wants him to because he’s still under contract.
As for Jussie’s tweet  which read, “I’ve thoroughly enjoyed my time with Empire and FOX. I love you all. Truth. Time 2 make a record & some movies,” and was retweeted over 20,000 times
that may have just been part of a standoff between Jussie and the network execs.
According to Media Take Out , though, Jussie was let go from the show because he got greedy in contract negotiations, demanding as much coin as his on-screen parents Taraji P.
Henson and Terrence Howard. “Terrence [Howard] and Taraji [Henson] are the stars of the show, and they are going to be paid as stars.
But the rest aren’t going to make huge sums from the show,” a source reports.
His co-stars Henson and Howard, the source explains, were able to get extra checks from FOX by hosting specials. A back door raise, if you will, to get around contracts but Jussie wasn’t given the same opportunity, and he’s not happy about it.
“Jussie wasn’t asking for way too much money just a nice raise. But the people at FOX were like no, there was no money left in the budget.” So, is he coming back or isn’t he? we hope to keep you updated.