According to the report from the National Bureau of Statistics, through Dr. Yemi Kale, Statistician General, data on Quarterly Gross Domestic Product (GDP) estimates for the four quarters of 2015, the annual figure for 2015, and estimate for the first quarter of 2016 showed that Nigeria’s Economy contracted by 0.36%.

Quarterly National Accounts (QNA) are integrated system of macroeconomic accounts designed to describe the entire system of production in a nation on a quarterly basis. They provide a picture of the current economic status of the economy that is more timely and frequent than that provided by Annual National Accounts (ANA). Data for this analysis were obtained from the Quarterly Establishment Survey (QES) conducted by the National Bureau of Statistics (NBS). 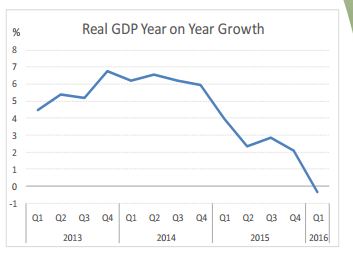 Key point: Nigeria’s GDP was contracting *before* the worst of fuel shortage/oil production disruption. Things will get worse. Much worse.

Compared to the First Quarter 2015 value of N21,041,701.10 million, nominal GDP was 5.80% higher. Nominal GDP growth was however lower relative to levels recorded in Q4 of 2015 by 14.15% points. The Nigerian economy could be better understood
according to the oil and non-oil sector classifications 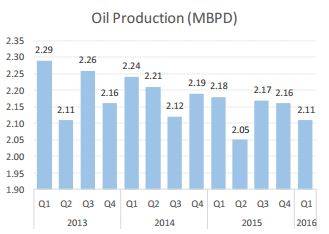 In the First Quarter of 2016, Oil production stood at 2.11million barrels per day (mbpd) 0.05mbpd lower from production in Q4 of 2015. Oil production was also lower relative to the corresponding quarter in 2015 by 0.07mbpd when output was recorded at 2.18mbpd. 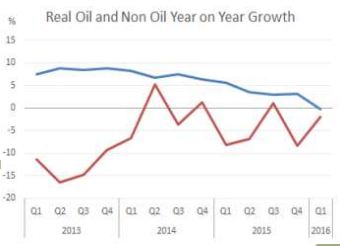 While activities such as Crop production, Trade and Telecommunications & Information Services supported growth of the sector, growth was weighed upon by declines in Manufacturing, Financial Institutions, and Real Estate. The sector slowed 0.18% in real terms in Q1 of 2016. This was 5.77% points lower from the corresponding quarter in 2014 and 3.32% points from the previous quarter . In real terms, the Non-Oil sector contributed 89.71% to the nation’s GDP, marginally higher from shares recorded in Q1 of 2016 (89.55) yet lower from and Q4 2015 (91.94%).

According to John Ashbourne , Emerging Markets Analyst in London, “Nigeria GDP Oil sector worse in Q4 2015 than Q1 ’16. Contraction was manufacturing falling off a cliff. FX system a failure on own terms. The GDP was contracting before the worst of fuel shortage/oil production disruption caused by pipeline vandalism in the Niger-Delta.”

Number of Nigerians in full-time work reduced by 520,000 within the same period.