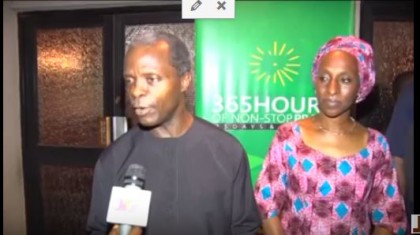 Vice President, Yemi Osinbajo has enjoined Nigerians to leverage on the power of praise to attracting god’s divine intervention in overcoming the challenges affecting the nation.

He was speaking at a musical concert tagged 365 hours of non-stop praise organised by the Aso Villa Chapel to commemorate one year in office of the President Muhammadu Buhari led administration. Records reveal that there have been 40 to 70 hours of nonstop praise to God, but non as long as 365 hours.

It was a gathering of gospel artistes, church choirs from all denominations praising God for 365 hours non-stop to mark one year anniversary of the present administration. Though it has been one year of a trying period for Nigeria, the Vice President Yemi Osinbajo is among many Nigerians who believe that when praises go up god’s healing and blessings floods the land.

This he affirmed is the idea behind the initiative. The non-stop activity started at 11o’clock in the morning of May 14 and will end by 4o’clock in the evening of May 29 being Democracy Day.

Many gospel artistes and choirs believe, passion in doing what they know how to do best is boosting their zeal as they testify in fervent belief that the effort will not go unrewarded. With Lester Lewis who sang “Jesus is a winner man’’ doing it in style and several others present, this divine intervention in praises  holds a lot of promise to the Nigeria of our dreams