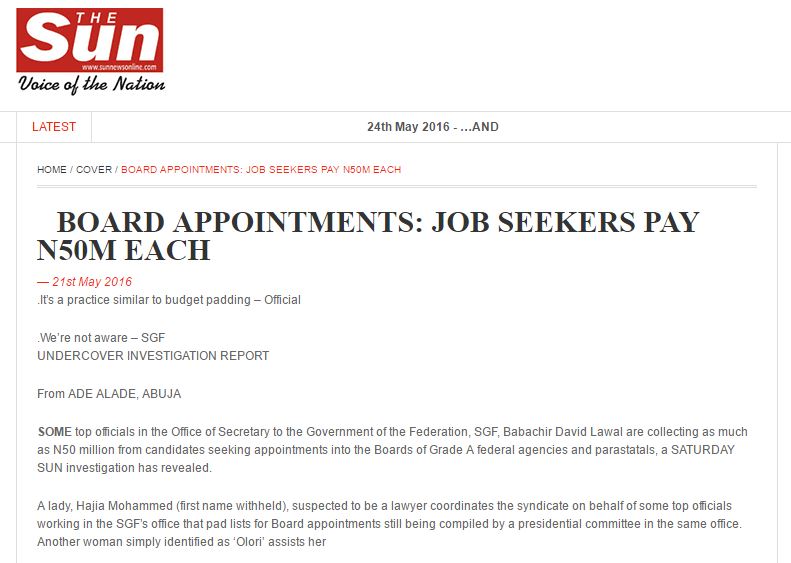 Report on ‘N50 Million’ Bribery for Board Positions: A Rebuttal – FG

The attention of the Office of the Secretary to the Government of the Federation (OSGF) has been drawn to a publication in the Saturday edition of the Sun Newspaper of 21st May, 2016 with the caption “Fraud rocks Board Appointments” by one Ade Alade.

The report has alleged, among other things, that “some top officials in the Office of the SGF, SGF, Babachir David Lawal, are collecting as much as N50 million from candidates seeking appointments into the Board of Grade ‘A’ Federal Agencies and Parastatals.”The Office of the Secretary to the Government of the Federation is not known to join issues with the Press on unfounded allegations made in the Press. It has, however, become necessary to issue a rejoinder to this particular baseless, mischievous and politically motivated publication, if only to set the records straight as well as protect unsuspecting members of the public from possible fraudulent activities by scammers, using the name of the OSGF.

The OSGF wishes to first clarify that, it does not make political appointments, including those into Boards of Parastatals, as this is the prerogative of the President. Neither is the Office involved in employment activities, which is the responsibility of the Federal Civil Service Commission or the respective Agencies as the case may be. With regards to the appointment of Boards of Federal Government Parastatals and Agencies, there is a Presidential Committee on Board Appointments with membership drawn from the six (6) Geo-political Zones of the Federation, none of whom is an official of the OSGF. The Committee, which liaises with all the States of the Federation, is saddled with the responsibility of identifying and recommending qualified and eligible nominees for Board appointments for Mr.President’s consideration. The Committee is composed of men of unimpeachable integrity and honesty in whom Mr. President reposes unqualified confidence to carry out this assignment to his satisfaction. It is, therefore, a sad and regrettable reflection of the level of degeneration of some journalists to have made such crude and mischievous allegation of corruption in the ongoing process of Board appointments. If the so-called Mr. Ade Alade has bothered to cross-check his facts, he would have found that it is a common knowledge that appointments into Federal Agencies and Parastatals are not done by covert means but through verifiable processes such as the Federal Character principle, qualification, experience and suitability as specified in the laws establishing the Boards.

It needs to be further reiterated that the so-called Hajia Mohammed or the “Olori” as mentioned in the Sun Newspaper publication are not known to the OSGF, and anybody who claimed to have had any transaction with them for any Board position did so at his/her own risk. The OSGF and, indeed, all Government offices have authentic and verifiable channels of communication with prospective nominees for Public Offices and the process does not require any so-called “syndicates” or intermediaries as mentioned in the publication.

It will be recalled that the OSGF has had cause in the recent past to warn members of the public about the existence of criminally minded persons who send telephone text messages to inform them that their names have been shortlisted for Federal Government appointments. Members of the public are accordingly strongly advised to ignore the activities of these syndicates who are indeed fraudsters and out to defraud unsuspecting persons in the name of the OSGF.