The Report of Child Abuse and Infliction of terrible injury on 20 months old baby, Musa Muritala in Kano, Kano State, went viral in the Social Media and the pages of Newspapers this week. 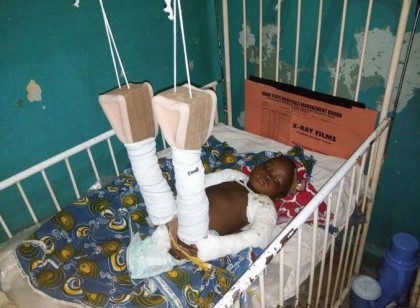 The injury which involved fractures on his two legs and arm, also had serious damage to his eyes and private parts were allegedly done by his two step mothers.

This was disclosed in a press release by the Coordinator, Muslim Media Watch of Nigerian (MMWG), Alhaji Abdullahi Ibrahim on Friday.

He said since then, what has been missing in the report so far is the police Report and update on the actions taken to bring the culprits to justice.

“The Muslim Media Watch Group of Nigeria therefore calls on the Kano State Police Command to come out with its report, on how far about the arrest of the devilish women who did that to innocent baby out of pure jealousy and wickedness.” He added.

The MMWG coordinator, said that The Child Right Act has sufficient provisions to deal with the crimes against innocent children and youth that are being committed across the whole Country, such as Infliction of injury, abduction, kidnapping, raping.

He called on the police diligent prosecution of the case so that appropriate judicial sanction could be meted out to the accused.