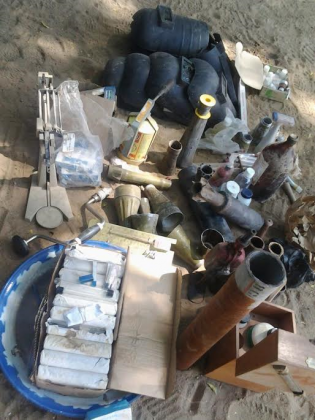 The NSCDC Commandant in the state, Mr Ibrahim Abdullahi, made the disclosure in an interview with the News Agency of Nigeria (NAN) in Maiduguri.
Abdullahi said that the factories were discovered during a patrol by men of the command in collaboration with the troops of the 22 Armoured Brigade of the Nigerian Army.
“In an effort to comply with the directives of the Ministerial Committee on Resettlement of Liberated Towns by the military, NSCDC had deployed its personnel to Dikwa and are working hand in hand with the military.
“This collective effort has therefore, led to the discovery of two major bomb making factories in two abandoned houses.
“Our Detection and Bomb Disposal Unit, Intelligence and Detective Operation Unit in collaboration with the troops of 22 Armoured Brigade of the Nigerian Army have since neutralised some of the live IEDs.
“Some IEDs making equipment, gas cylinders and a jet bomb propeller were discovered and handed over to the brigade command.
“Men of the command also discovered 114 live machine gun ammunition along Dikwa-Mafa road just after Shehuri Village that was abandoned by the insurgents,’’ Abdullahi said.
NAN recalls that the command had deployed about 200 men to Boko Haram librated communities, including Dikwa, Munguno, Nganzai, Chibok and Askira Uba Local Government Areas of the state.