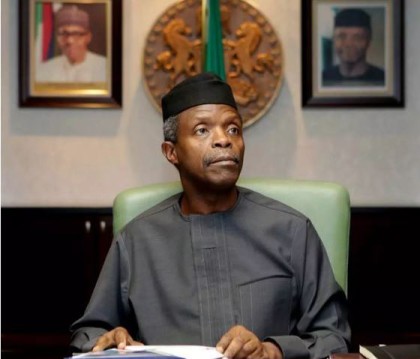 Federal Government has again emphasized the need for ease of doing business in the country just as President Muhammadu Buhari has approved the formation of a Presidential Commission on the matter, according to Vice President Yemi Osinbajo, SAN.

“President Muhammadu Buhari has approved a high-powered commission to work on the issues around the ease of doing business in the country,” the Vice President announced while presiding  over the first Quarterly Consultation between the presidency and the Manufacturers Association of Nigeria, MAN, Friday afternoon.

Prof. Osinbajo said “the commission will have a secretariat to be headed by a private sector professional,” who will be appointed to lead the secretariat of the presidential commission that will now pay even greater attention and focus to the issues of doing business in the country.

At the consultation MAN  raised among many concerns, their worries about cases of multiple taxation, and in response the Vice President promised to follow -up on the matter, adding that “one of the key issues the presidential commission which I am heading would be  looking at is the case of multiple taxation.” He added that this is also an issue that the Ministry of Trade and Investment is also actively engaged with.

At the end of the meeting, the President of the Manufacturers Association of Nigeria (MAN), Dr. Frank Udemba Jacobs, while speaking with State House Correspondents expressed concern about the acts of vandalism regarding the nation’s oil and gas installations describing such as economic sabotage.

According to him, while “the association is happy about what the Federal Government is doing, but we are concerned about what is happening in the Niger Delta area which is a kind of sabotaging the economic activities of government and therefore we want to call on them to lay down their arms in the interest of the country.”

He called on the militants to join hands with government and move the country forward. The MAN president stated that diversification of the economy is the best way to go now given what is happening in the internationally.

He said the association is “keying” into government policy in terms of diversification of the economy by doing their best to increase the capacity of production.

Laolu Akande
SENIOR SPECIAL ASSISTANT (MEDIA AND PUBLICITY)
IN THE OFFICE OF THE VICE PRESIDENT
MAY 30, 2016.