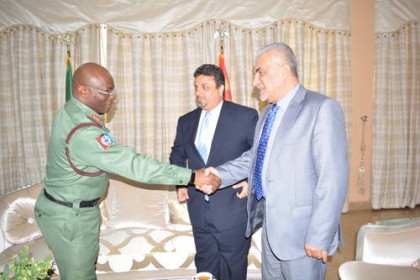 Defence Headquarters Nigeria, a high power delegation from His Royal Majesty King Abdullah II of the Republic of Jordan has paid a courtesy visit to the Chief of Defence Staff (CDS) General Abayomi Gabriel Olonisakin at the Defence Headquarters (DHQ) Abuja, to explore areas of collaboration on ending the threat posed by the Boko Haram Terrorists.

The Jordanian delegation which was led by the Special Adviser to the King of Jordan on Political Affairs, Mr Manas Dabbas, congratulated the CDS and the Nigerian Armed Forces for their doggedness at decimating the Boko Haram Terrorist and sought for closer collaboration in the area of intelligence gathering, regional cooperation and capacity building to enhance total eradication of extremist groups in Africa.

He noted that the world is experiencing serious security threats from assorted radical groups like Boko Haram, Al-Qaeda, Al Shabbab, etc and called for concerted efforts by affected countries to emplace mechanisms to under study conflicts and crisis occasioned by terrorist organizations with the aim of defeating such terrorist groups.

Mr Dabbas lauded the efforts of the CDS in piloting the affairs of the Nigerian Armed Forces and pledged his country’s commitment to assist Nigeria in combating the threat posed by Boko Haram and other terrorist organizations in the country.

In his remark, General Olonisakin thanked the Jordanian envoy for the visit and briefed the delegation on the operations of the Multi-National Joint Task Force (MNJTF) and the synergy between regional troops to degrade the Boko Haram terrorists.

The CDS solicited for cooperation in the area of training and provisions of counter Improved Explosive Devices (IEDs) and emphasized on the need to interface with regional forces and security agencies to eliminate the threat from radical terrorist organizations.

The CDS was accompanied by some Principal Staff Officers from Defence Headquarters to received the Jordanian delegation. Highlights include the presentation of souvenir to the visitors and a group photograph.