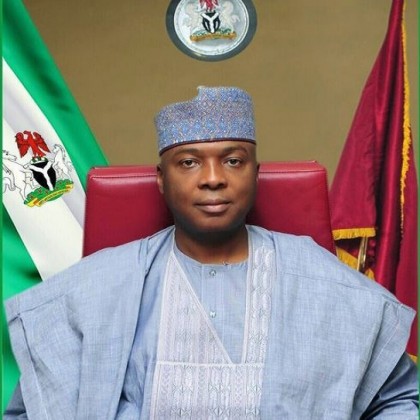 Senate President, Dr. Abubakar Bukola Saraki has appealed to herdsmen and farmers across the country to maintain peace as the National Assembly is ready to proffer lasting solution to the perennial clashes over grazing by cattle.
Speaking yesterday when a group of herdsmen from Kautal Hore Socio-Cultural Association, Jigawa State branch visited him, the Senate President who described the perennial clashes between the farmers and herdsmen as unfortunate, also appealed to the herdsmen to maintain peace at all times.
According to Saraki, “the National Assembly and all the stakeholders have been meeting on how to ensure that there is permanent peace between the two major groups in the nation’s agricultural system”.
He expressed concern over the recently frequent clashes, explaining that Nigeria is not the only country where farmers and herdsmen co-exist.
“There must be peace. There must be peaceful coexistence and there cannot be peace when human Lives are being wasted. The National Assembly will stop at nothing to ensure that there is peace. We will not stop working until there is peace between the farmers and herdsmen in this country. Please be patient”, Saraki said while promising that the Senate will soon come out with suggestions  on how to end the conflict.
Earlier, chairman of the group, Umar Kabir Hadejia in his speech titled, “Appeal for an intervention” said the Fulanis are traditionally a nomadic pastoral people who rear their cattle and sheep across the vast territory of Nigeria as the largest nomadic group in the world.
He lamented that due to urbanisation, there has been an increasing trend of conflict between farmers and the pastoralists largely due to the Fulanis seeking fertile grazing lands for their developmental purposes.
This action, he said has resulted in violent attacks and reprisal counter attacks between the herdsmen who feel that their way of life is being threatened on one hand and the farmers on the other hand who felt aggrieved that their farmlands and crops were lost due to the activities of the herdsmen.
Umar Hadejia lamented that leading politicians and presidential aspirants in the country during election had made promises to provide the cattle rearers with grazing land but they all failed to deliver on the promises.
He therefore said Fulanis believe that provision of grazing reserves would boost livestock population, lessen the difficulty of herding and reduce seasonal migration as well as enhance the interaction among farmers, pastoralists and other rural dwellers.
Umar Hadejia maintained that herdsmen were not belligerent and terrorists as they are branded in the media. He however called on the Senate committee on Agriculture to wade into the matter with a view to coming up with an enabling law that will protect the image and integrity of all Nigerians as well as the rights of herdsmen to tend to their livestock.
Signed:  Chuks Okocha
Special Assistant to the Senate President on Print Media