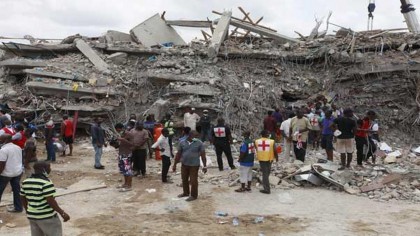 News Agency of Nigeria report was at Ikeja High Court as hearing on Lagos Synagogue church building collapse was fixed June 3 for the trial of the two engineers who constructed the collapsed seven-storey guest house of the Synagogue Church of All Nations at Ikotun, a Lagos suburb.

The defendants are Akinbela Fatiregun and Oladele Ogundeji.
The News Agency of Nigeria (NAN) reports that Justice Lateef Lawal-Akapo adjourned the case to give the Defence more time to study the proof of evidence filed by the Prosecution.

“The trial will have to be adjourned to enable the Defence to study the proof of evidence.

Earlier, Mrs Idowu Alakija, the State Director of Public Prosecutions (DPP), informed the court that she had just filed the proof of evidence and requested that the trial should continue.

“My Lord, we have filed an additional proof of evidence, we were not able to file all that was contained in the list of exhibits.

“I request a stand down to give the Defence the opportunity to look through the proof of evidence that we filed to enable us continue the trial immediately.”

Mr Lateef Fagbemi (SAN), a defence counsel representing the trustees of Synagogue, however, objected to Alakija’s request for a stand down.

He said: “My Lord, I salute your ruling of May 23. It was only this morning that the additional proof of evidence was filed.
“A stand down would not work because I need at least a day to study the proof of evidence and it involves us calling in experts to analyse it which will aid our cross-examination.

“Please give us the opportunity like you have been giving us to exercise the right to fair hearing.”

NAN also reports that the engineers alongside their companies — Hardrock Construction and Engineering Company and Jandy Trust Ltd and the trustees — are facing a 111-count charge of gross negligence and criminal manslaughter.

At the last hearing of the case on May 23, a witness, Mr Adebayo Olayinka, was prevented from giving evidence by the Defence because his statement was not frontloaded by the prosecution.

Justice Lawal-Akapo had ruled that the prosecution should file all their proof of evidence before the next date of adjournment.