NAF Geared For Base Defense and Protection of Air Assets 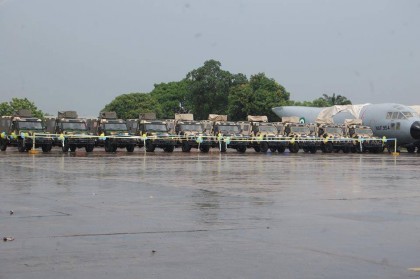 Defence HQ: The Nigerian Air Force (NAF), as part of efforts towards coping with the dynamism of emerging security threats, is adopting a new concept of base defence to protect its air assets and critical installations.

Aside reorganizing, retraining and re-equipping the Regiment Specialty to effectively defend NAF Bases against attacks, the Service has also employed the use of Closed Circuit Camera to provide surveillance around perimeter fences of NAF Bases while monitoring the entire Base from the Base Defence Coordination Centre.

Under the new concept, effort is geared towards expanding the Regiment Specialty to be able to take over all ground defence duties with a view to securing NAF Bases and critical assets. The recent acquisition of 10 specialised Honker Scorpion Vehicles is in furtherance of this objective by providing guards with the capacity to respond quickly to security breaches. The vehicles possess armoured capability thus offering additional level of protection to guards.

Speaking during Commissioning ceremony, the Chief of Defence Staff (CDS), General Abayomi Olonisakin stated that the induction of the Honker vehicles will enhance the capability of NAF Regiment personnel to effectively contribute to the collective efforts at addressing the security challenges facing the nation, adding that “the procurement was a testimony of the importance the NAF attached to the protection of its critical assets and personnel”.

Meanwhile, the Chief of the Air Staff (CAS), Air Marshal Sadique Baba Abubakar has reiterated that the nation, and NAF in particular, cannot afford to lose its critical assets to the activities of insurgents, terrorists and militants. Air Mshl Abubakar stated that the NAF is therefore committed to adopt all necessary security measures to forestall occurrence of past mistakes.

The CAS added that the deployment of the Honker vehicles is intended to significantly enhance the NAF Base Defence System as well as security of key and vulnerable points around the nation including the airports. Another major advantage of the Honker vehicles is that it helps to eliminate the system hitherto in place where guards were made stationary at their guard posts.