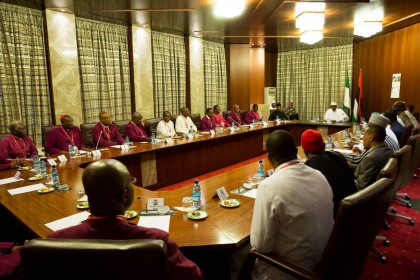 Femi Adesina: President Muhammadu Buhari said Friday in Abuja that while the rescue and safe return of the remaining Chibok girls remains a top priority of his administration, he will not fall for the antics of fraudsters who have been asking the Federal Government for money to negotiate the release the girls.
Receiving the Primate and Archbishops of the Church of Nigeria (Anglican Communion) at the State House, President Buhari said that his administration will continue to insist on a thorough authentication of the identities and bona fides of any persons or groups claiming to have custody of the girls before entering into negotiations with them.
The President, however, assured the Anglican Bishops of his steadfast commitment to the rescue of the Chibok Girls, saying that their safe return will be one of his greatest fulfillment in office as President.
President Buhari also assured the clerics that the Federal Government will give maximum attention to the clean-up of Ogoniland which was launched yesterday.
‘‘We inherited the United Nations Environmental Project report from the previous administration. We decided it needed urgent attention, in spite of the economic crunch because of our concern for the welfare and environmental comfort of the people of Ogoniland,’’ he said.
Earlier in his remarks, the Primate of the Church of Nigeria (Anglican Communion), Most Rev Nicholas Okoh pledged the support of the church in helping the Federal Government achieve its objectives of improving security and the welfare of Nigerians.